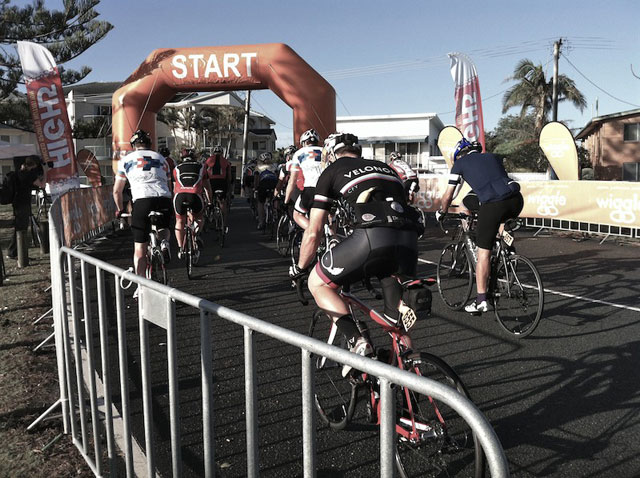 “What time?” was Kate's incredulous response to the, I thought, innocuous question of what time we'd have to be up to head to Kingscliff from our place, for a 7AM start of Wiggle's Speed in the Tweed.

“You'll be right, luv, I'll bundle you in to the car with a mocha.”

So, off we set, at the very uncivilised hour of 5.20AM on Sunday 24th November, for Wiggle's Speed in the Tweed.

Whilst the storms of the past week had cleared, the humidity lingered, with tendrils of heat and humidity dispersed amongst the valleys.

I'd only realised the day before that it had been about a year since I'd ridden 135km. My last ride over this length was a 200km ride a year ago.

I then realised I was probably unprepared for a day of dead roads, high humidity and endless hills.

Apprehension lingered, but it was too late now.

Arriving in time, just, I bumped into Steve of VeloRoo, registered and got in place.

We got away and quickly grabbed onto the lead 8 or so guys, only to see one of them slide out and go down softly on the first, gentle, left hand bend at some lights (my “80mm tubs, obviously” joke didn't get a good response). 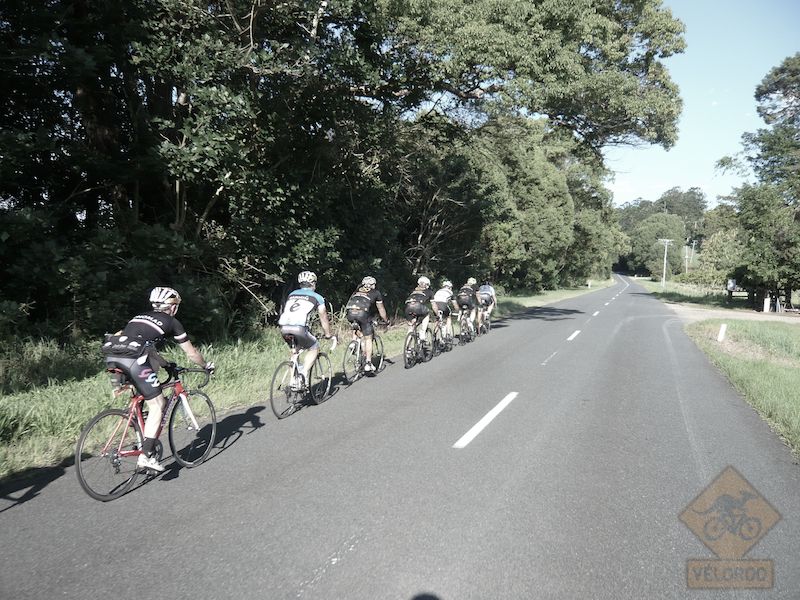 After that the hammer was dropped and it was on. The pace was nice at 35-50km/h with only the hills interrupting the fast pace.

As the short pitches began—the area is replete with short climbs of 200m-2km at 7-15%—riders were being shelled at km-40.

The first serious climb of the day was up the Burringbar range. The road is super smooth (rare to find hot mix roads in this area) and the pace was high. We'd formed a nice group and since no one seemed interested in being the road captain, I nominated myself to ensure we tried to keep the stragglers (useful on the flats as they were big roleurs) with us. 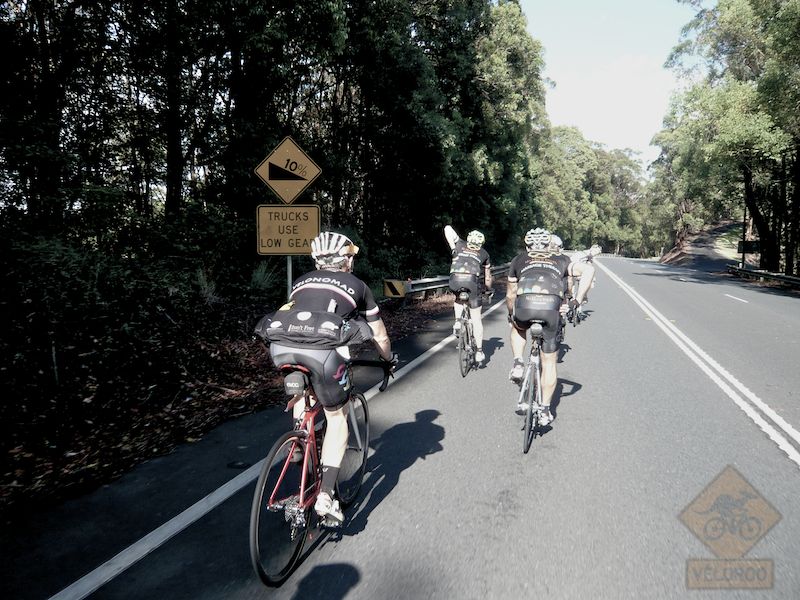 Top of the range 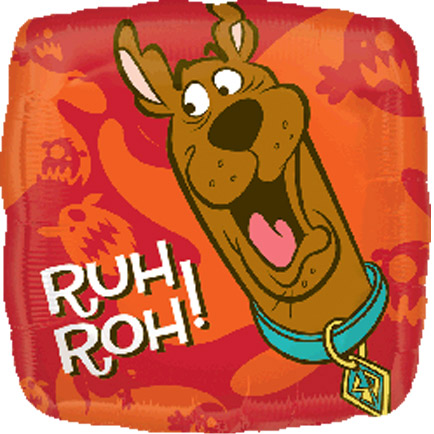 Absolutely spectacular scenery around Mt Warning kept my mind off the pace, as cramp cruelly set in way, way too early. 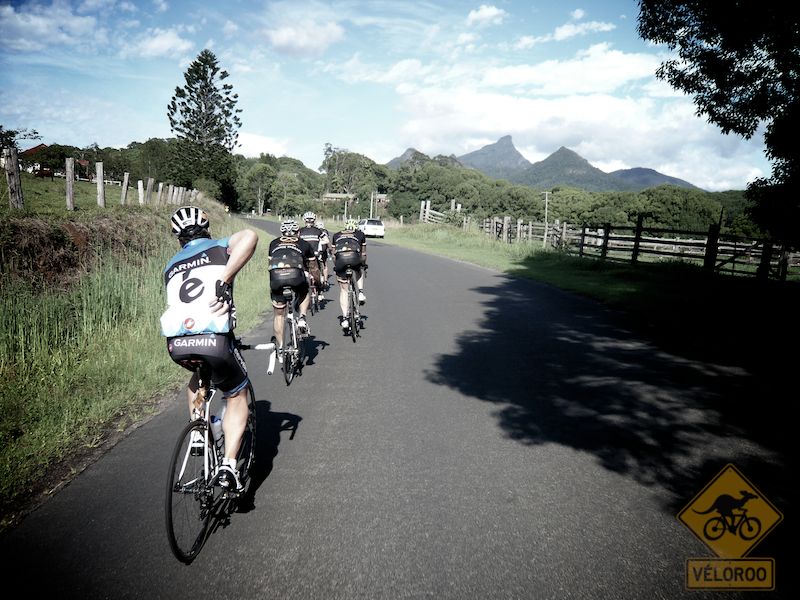 Not a full-on cramp but the early warning twinges. You know the ones. The little cramps that sometimes portend complete disaster.

Three Hammer Enduralyte tabs and the cramp was gone in short time.

Steve was exhorting me to the front around 60km. “You must be mad–there's still 65km to go!” was my retort.

(Yes, a not-pro comment by me, but when the going gets tough, the not-pro get wheel sucking.)

I was starting to struggle on the flats (god, it was just like a handicap: no hiding!), with every turn taking us further away from our destination. 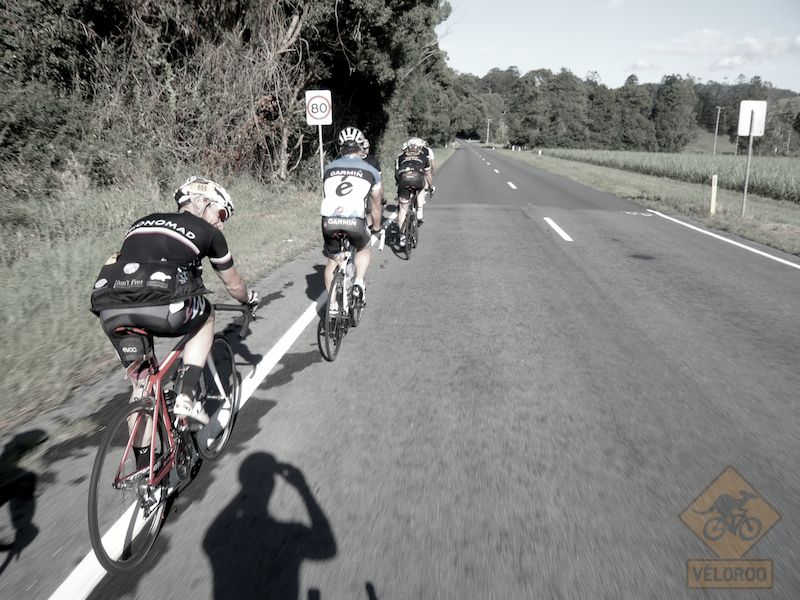 We all stopped together at the feed stations to stock up on electrolytes and water, both absolutely essential in the conditions.

We finally made the turn for the coast, had another couple of climbs, and faced a final 50km: a mostly flat or downhill smash fest with a cross wind.

The group kept forming an echelon—hey, you guys!—I thought this was a friendly sportive!

We started passing more and more riders from the shorter rides, including some walking. Maybe some Gran Fondo training was in order?

My legs, as they are wont to do, finally came good at 80-90km and I was able to help on the front, which was nice (as much as I love taking it easy, it's just not cricket).

We caught up with the old fella I mentioned earlier, who'd been endlessly sledging the younger blokes on the way out as he did a lot (a LOT) of work on the front (he'd skipped a group drinks stop to get a head start on the hills).

(Harsh, but probably fair. Then again, you don't see Bernard Eisel ripping into Wiggo, for not doing work on the front. Even though Wiggo totally would get on the front.)

We approached the final climb into the low escarpment outside Kingscliff and came upon a girl going so slow, she simply fell over flat on her side as we approached, due to a lack of momentum. Luckily she was fine, but it was so bizarre, I'd never seen that happen before.

I snuck a casual “so are we racing to the finish” to one of the stronger guys (700km a week training!) who smirked and said “we'd better not” or something to that effect. I called bull$hit on that response and prepared for some attacking. (Shout out to Brian Cooke!)

The last few kilometres across the escarpment were up-and-down little pitchy climbs, with riders being shelled. We finally lost VeloRoo Steve after a gallant ride doing heaps of work.

We finally headed downhill into town, building speed, hit the main drag to the finish line…

And all rolled across together in a gentlemanly-like fashion.

What a fantastic day out on the roads!

It's not often I get to do group rides like this, so I really appreciated being with riders who knew what they were doing and who could set a decent pace.

This just goes to show, you don't have to go overseas to do an awesome gran fondo.

It was great to find out I'd been riding with a VeloNomad email lister (hey Brian!) all day, which was cool.

I also bumped into a few ladies from the Wiggle Honda women's pro team including Rochelle Gilmore, Lauren Kitchen and Charlotte Becker. I'll have an interview from some of those ladies soon.

Here I am, standing awkwardly without my bike. Like Ricky Bobby in Talledega Nights, I don't know what to do with my hands. 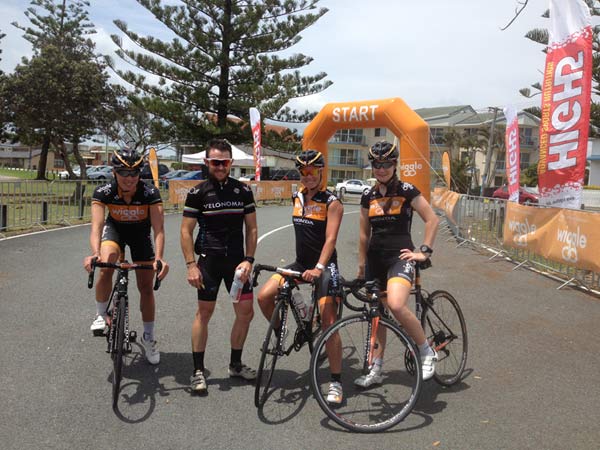 With Rochelle, Charlotte and Lauren

I've done quite a few Gran Fondos including Etapes du Tour, and I have to say, Wiggle and Limelight Sports put on a great event.

All the corners and course turns were clearly signposted, there were marshals everywhere cheering us on, food stations were ample and we had electronic timing. There was a photographer on course (though I won't see any of mine as I ripped my identifying number off the front of my helmet) too which was great.

If you get the chance, you should definitely check out a local Wiggle event in your area.

For the Aussies, the Morning-ton is still to be run on Feb 23 2014. You can enter Wiggle's Morning-ton here.

VeloNomad was a guest of Wiggle and Limelight Sports. Speed in the Tweed results and times here.