I love receiving emails from readers with photos and stories of their travels through France, particularly when they tell me how useful the Guide to Cycling through France was.

The below email is from Chris H, of Sydney, Australia.

Bonjour Tim,
Cycling in South of France during this years 97th Tour of France has ruined me for life!

I can't get out of bed at 5am in the mornings anymore after 30 degrees in Pamiers. I can't find a thing to complain about; the food was sensational, cycling on roads where cars don't toot or abuse you and people only yell out to support cyclists. The only traffic I encountered were cows with bells on the side of the road or farm tractors in small villages.

Col du Tourmalet at 2115m destroyed me but I show all my mates the pictures from the top with pride.

I found your blog so useful and took a hard copy [Ed: of the Cycling Through France guide] over to France with me.

Thanks again and already talking about 100th Tour in 3 years time. My mates are sick of 100 photos I took and I don't care if you can't see a race number it was Lance Armstrong at Revel I captured on film.

PS – I also cycled around Paris, Berlin and Copenhagen and can't believe the priority given to cycle lanes and paths in these big cities.

Chris was good enough to send a couple of photos to me as well. 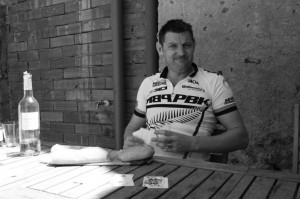 Chris chilling out in the South of France

The Tourmalet is a tough, tough climb, with Chris noting of the photo below:

I laugh when I look back at the photo of the donkey on the road – this was about 300-500m from the summit and I swore at the time I had altitude sickness and was starting to lose the plot. 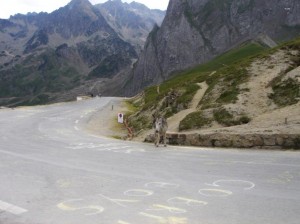 Donkey on the Tourmalet

Got any photos and stories from chasing the Tour or doing L'Etape? We want to see them!
Drop us an email here and we'll get back to you.

Next Post: How to Plan a Cycling Trip to France – the series