We had a cracking sleep then woke up to a hot Alpes day and the D'Huez beckoned. We went into town for croissants and coffee and a bit of morning market shopping then I knocked out another D'Huez ascent.

This area seems to have a pattern of awesome morning weather then cloudy and sometimes rainy afternoons.

The Saturday market was awesome as everyone comes to buy/sell their stuff and the artisanal food is amazing, the cheeses and cured meats are awesome, I forget why we didn't buy any! Maybe the flies on the Saucissons? Hmmm. Kate looked dubious at a suggestion to buy some.

The croissants here were a let down, certainly not up to scratch! As with all French coffee – terrible. I've been taking barista classes at the formidable Espresso3121 and the owner Eamon has made me the ultimate coffee snob!

We found a bike shop for me on the Saturday which was good as I had the wrong brake pads on (Swisstop carbons on aluminium clinchers!) which made the descent off the Alpe very sketchy. This is the main bike shop in town and it's awesome. Very busy but some cool stuff and loads of cheap commodity things (SwissStop carbon brake pads, 222Euro).

I considered a sneaky Glandon ride at a very healthy 70km HC return in the arvo, but opted to keep the legs fresh by doing just D'Huez. Plus I didn't want to be away for hours.

I cracked about 1'02” and got back to town in time for the Tour finish. 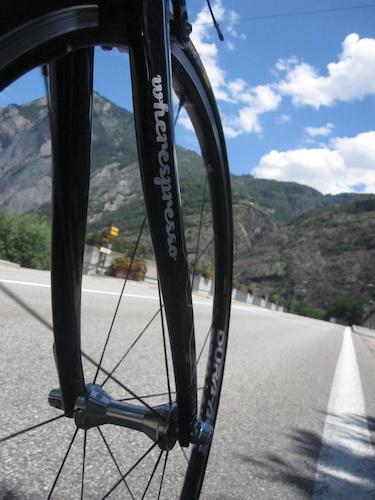 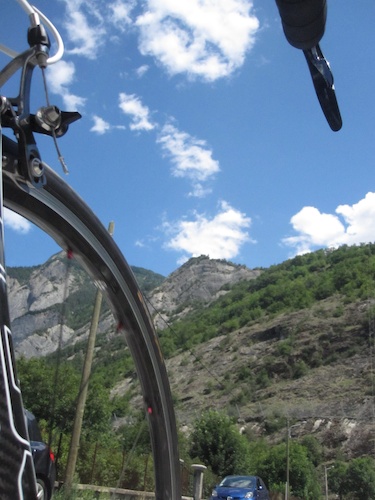 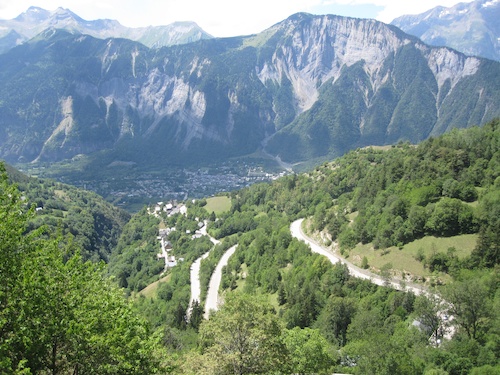 View down toward d'Oisans 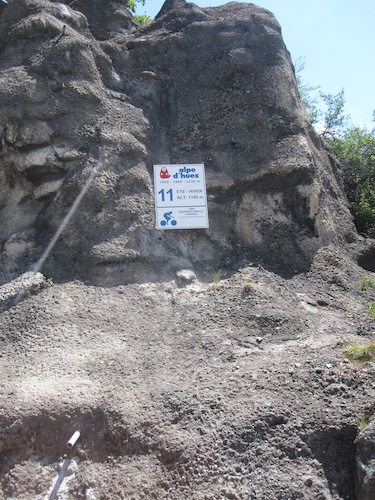 One of the famous markers 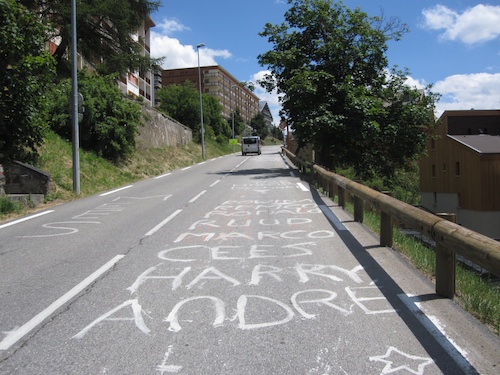 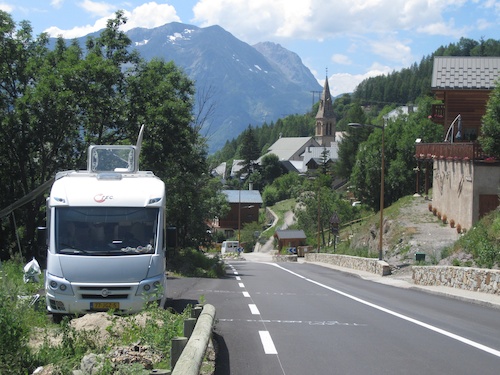 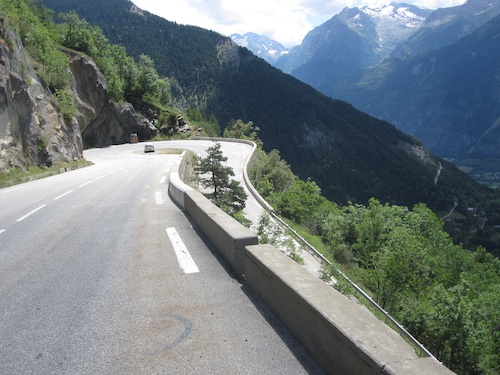 On Saturday we found a bar run by some Dutch which was awesome as they're mad – CRAZY mad – about the Tour and cycling in general so we parked up and for 25 Euro had two toasted sangas each and a lot of beers. Awesome. We had a chat about their business and I mentioned TDF Tips. The Dutch are crazier than Goldmember. They LOVE the face off their cycling. They were already parked up on the Alpe D'Huez for the Tour – nearly 2 weeks ahead of time. Commitment!

The next day we headed over the Galibier and Lautaret which is an epic, epic drive. But stopped first for a baguette. 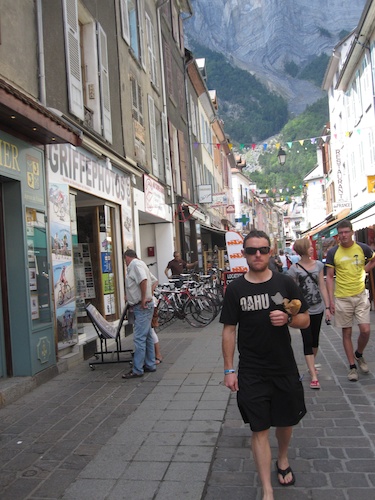 YAB - Yet Another Baguette

The sheer scale of the Alpes is staggering. It's humbling. It's hard to get your head around the millennia structures like this took to be created…I could wax lyrical on this stuff for ages but apparently I am a bit wordy so shall try to compress my thoughts. 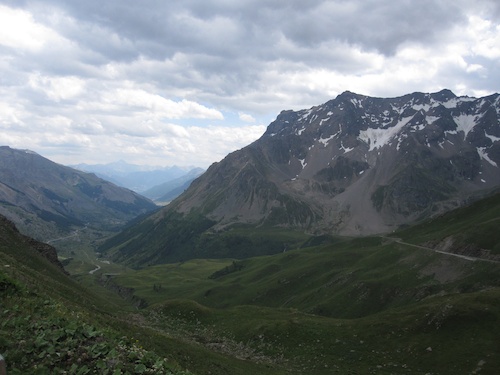 View from the Lautaret 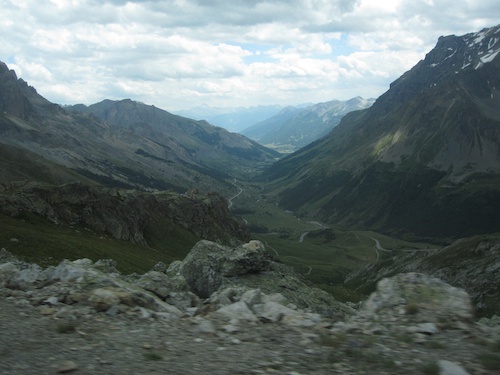 View from the Lautaret

Kate was doing some excellent passenging with her head nearly coming off in a passenging frenzy looking at waterfalls, mountains, ravines. The drive up to the Col du Lautaret is awesome but like most Alpes driving best done in an Audi Mig fighter jet not a 1940 B52 bomber that has just been strafed by German Werchmact flak and is down to one engine and somehow has to get across the channel being pursued by Baron Von Richthoffen playing Die Valkyries and curling his excellent Teuton moustache….brrrrrrrrrrrrrr splutter splutter.

The French spend an inordinate amount of time playing funny buggers on the road by driving on the wrong side and refusing to move into their lane.

We went through the tunnel under the Col du Galibier (more photos from Etape to follow) and headed down an equally precipitous descent that could only have been surveyed by a drunken Frenchman into St Michele de Maurienne.

Now, the Maurienne valley is a complete contrast to other parts of the Alpes. Whereas you have very Swiss and French Alpine influenced type places, or places that are big ski areas and hence a bit more upmarket (Bourg St Maurice) – all VERY pretty – the Maurienne valley is a dirty, gritty industrial valley that is a transit into Italy via the Tunnel de Frejus under the mountains. Trains, buses, trucks, yuk.

We got into town and went up to Modane for Etape registration. In a typical example of woeful French logistics, or, I should day, a perfect and exquisite example of the complex and nonsensical French politics, registration was atop a ski resort – YES a ski resort – Val Frejus. Ordinarily this might sound reasonable, but try sending 10000 participants up a mountain for event registration (not to mention thousands of partners, sponsors and event staff). What do you get? Unmitigated chaos. Unlike the last two years which were a breeze, this was a debacle.

So, we were told, “NON” to riding up and we had to catch a bus. But there were buses only every so often from our car park. Some sort of diabolical.

We eventually got up and Kate's head nearly came off again in a stunning display of passenging and general bus trip enjoyment. I think I shall send her around Australia on a bus. Just to see what happens.

Registration was quick, and we got back off the mountain. I said hi to VeloNomad Peter H'AC who was looking ripplingly fit having spent the last few months riding his custom steel Cytek around and getting ready like a sneaky Etape Ninja. 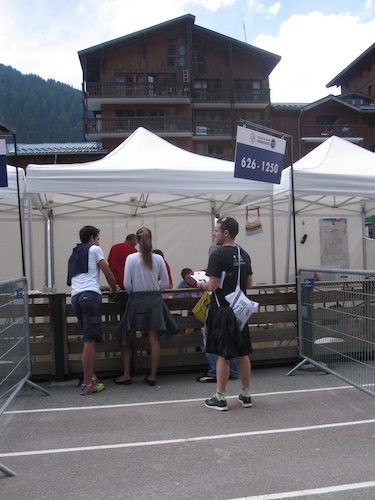 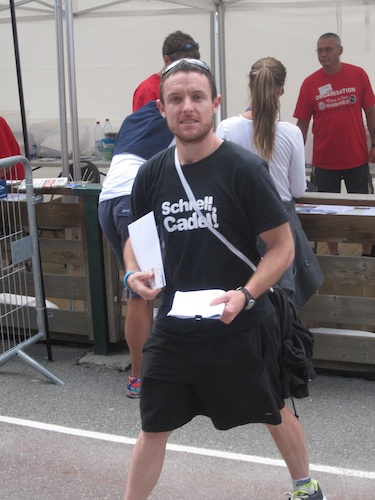 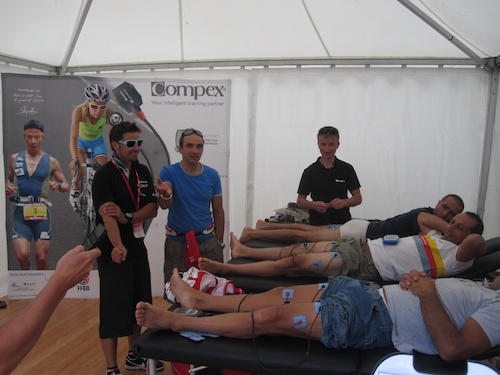 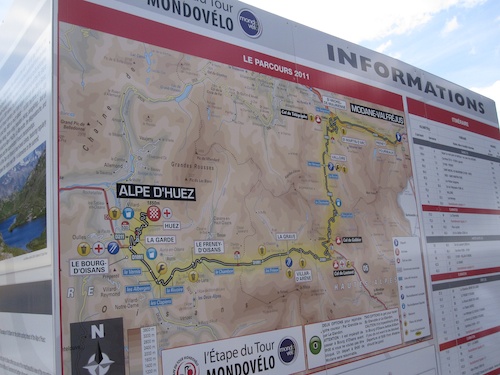 We stopped in Fourneaux just down from Modane to have a beer (really – Coke and Perrier) and watch the Tour finish…and felt very uncomfy in the bar we were in. Weird. But good on little Tommy Voeckler for getting the yellow. I didn't understand why he busted his guts to put time into the peloton and subsequently giving the win to the classy Luis Leon Sanchez in his crazy orange Rabobank kit (Kate was as mystified as I) but all became clear the next day when I was told it was for the maillot jaune. Cadel lurks ominously.

As I said before, it's not a very nice place the Maurienne valley. We were glad to be gone out of the bar.

Heading into Michele de Maurienne for dinner NOTHING was open. We ended having tuna and La Vache Qui Rit (Laughing Cow Cheese) on bread we luckily scored from a patisserie open at 8PM. Two restaurants in town were full. One had spots but I guess the waitress was grumpy and didn't want to help us out. Told us they were “Complet” (for all your non French speakers, this means, idiomatically, “we are full”). Bastards!

Here's my pre-Etape fuelling! Whilst others pasta'd up, I was going lean. Eating is cheating! 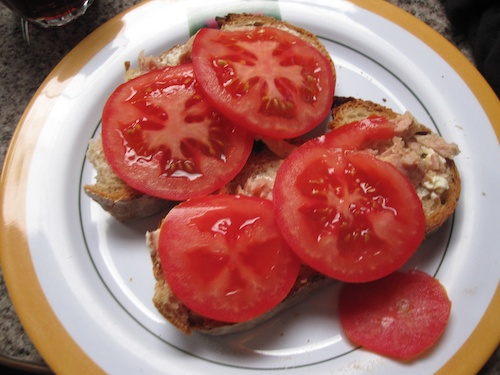 The camping ground we were in was sketchy – plenty of people around, it just felt weird. Not a nice place to holiday. Didn't get much sleep and Kate waved me off at 5.30 for a 20km ride up to Modane to warm up.