After a couple of days we drove over the Col du Portillon – a Bucket Col from both sides – into France, through Bagneres-de-Luchon. Our aim was to see the TDF head up the Ancizan on Stage 12.

We arrived into Arreau, got a park and pizza'd up. The caravan started rolling into town as we ate.

We quickly headed out of town on foot and found some empty space and waited. The caravan continued to roll through as we collected more stuff. Kate was pretty excited and did some excellent BACKWARDS running-on-the-spot practising to try and get on TV. 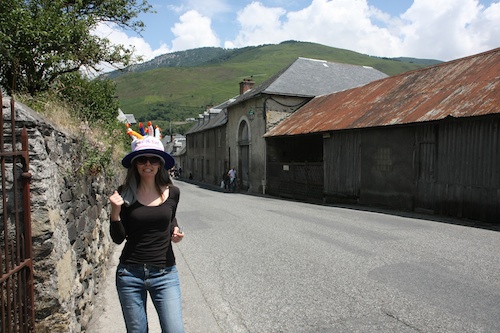 Backwards running on the spot

As I took some photos to get my camera settings right, a bunch of jokers propped up right in front of us, even though I was clearly taking photos down the road, clowns. There was loads of space around, but, apparently that was the only spot for them.

We went to the other side of the road and promptly had another clown with his young son take position in front of us.

This guy (who I'll call Silly Man) would end up causing a lot of trouble and almost getting taken out by the peloton.

The choppers soon arrived and Silly Man propped up about 1 m onto the road. He obviously was going to be in the peloton's way but seemed unperturbed even as the last of the gendarmes waved him off the road.

The breakaway rolled past us at warp speed. 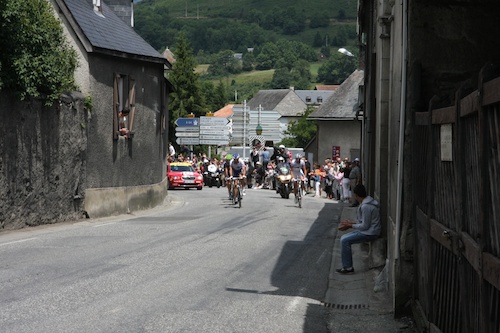 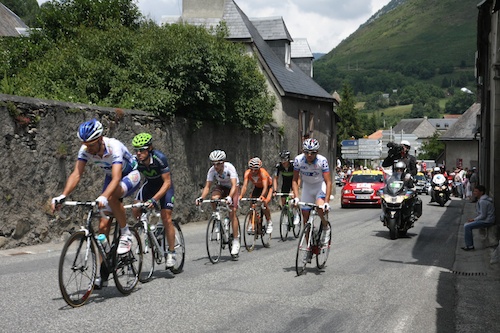 I reeled off some photos then watched as chaos threatened to unfold. 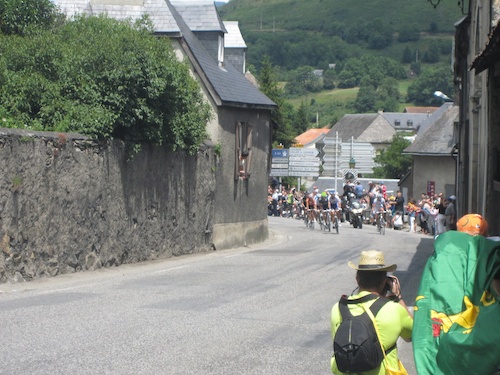 A few riders yelled him off the road then the following riders started to mow him down. He finally appeared to realise he was precariously poised and made swift moves to get off the road – by nearly falling out of the way. I think the photos below adequately illustrate the proceedings. 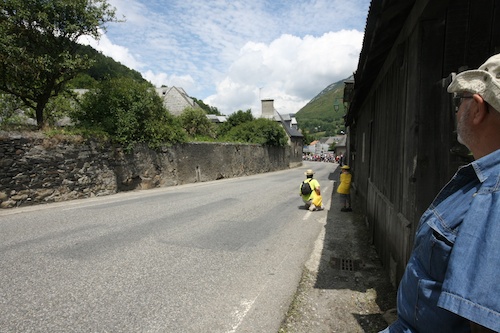 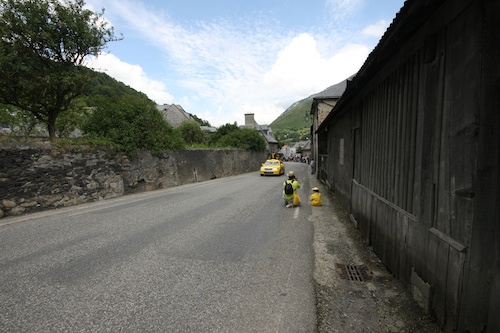 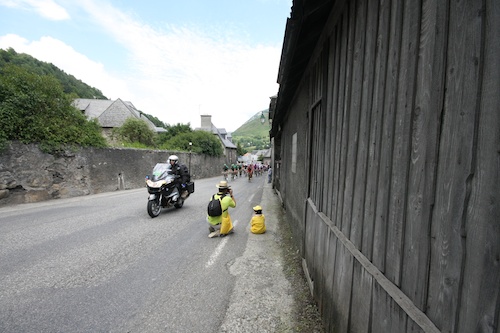 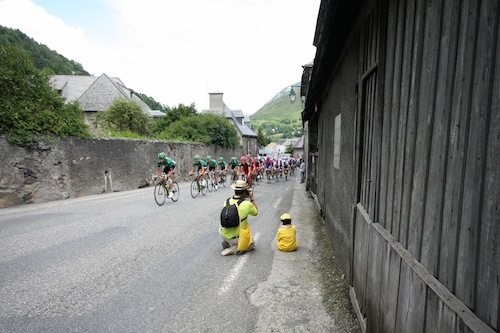 About to be mowed down 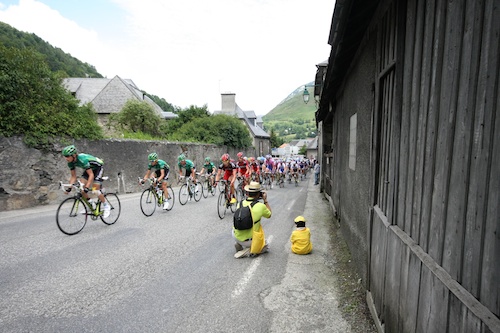 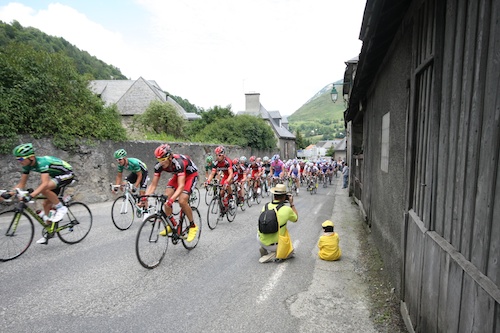 The Europcar and BMC trains 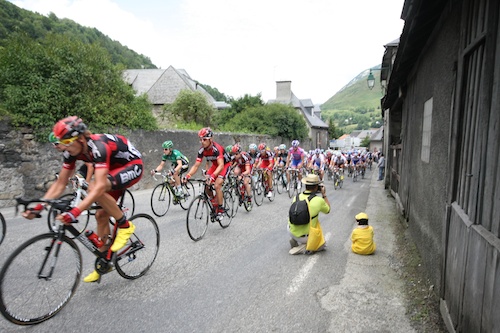 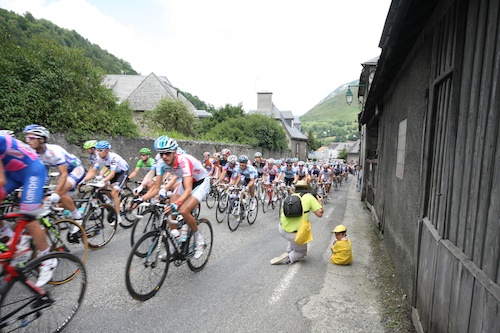 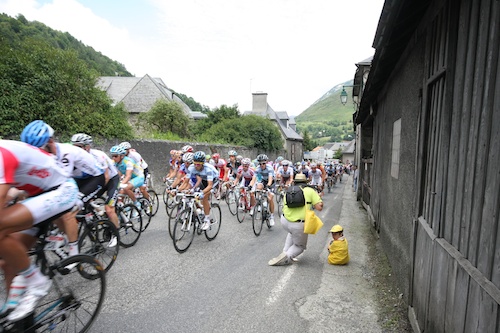 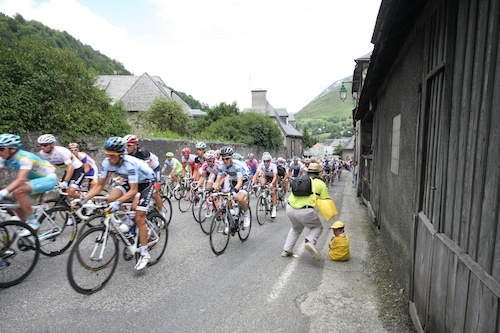 This was closer than it looked 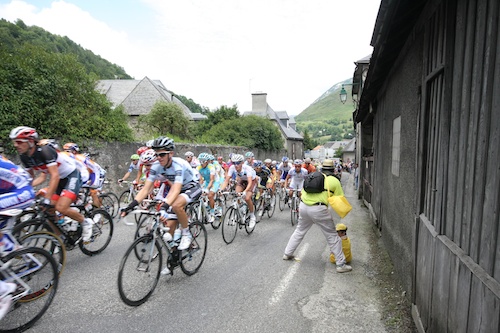 We headed down into a bar as the peloton passed, and I knocked off some chantilly cream and Grand Marnier crepes (no wonder I put on 3kg!), coffee, beer and so on as the stage unfolded.

One thing about the Tour is, unless you're on a HC or steep climb, it passes so quickly. You spend a bunch of time waiting for the caravan and riders then they pass so quickly! It's a bit of an anti-climax.

After Le Tour, we stayed in Arreau the night. Another day, another baguette for dinner.

The next day, we were headed to the Plateau de Beille for Stage 14.