Damien is a guy from NZ who emailed me pretty bummed at how far back the Etape had put him at the start. He sent me through his Etape report which is pretty hilarious reading. Thanks Damien!

By Damien Kearney – NZ
Here's the email from Damien that accompanied his report.

Didn't end up doing the Glandon, but did do Mont Ventoux on the 21st of July. The bottom was nice, but the top was freezing and blowing about as hard as I was comfortable to ride in, mostly! I got blown off my bike on the final corner, and blown off again going down just after that same corner.

It did give me the opportunity to meet Big Lance however, he was on his way up as I was riding down. I ‘just' turned around when i realised it was him and rode back up to him. It wasn't that hard, can't see what the problem was for 7 years.

Sorry, no photo with Lance, my wife had the camera down in Bedoin with our daughter. The weather was sh$thaus, I got blown off twice and struggled to brake on the way down. I honestly think it was worse than the Alpe, 1.30 to the top. I have written a report in the diary we wrote for our daughter on our holiday, I will type this and will flick it across to you.

Etape photos are a write off, camera fogged up and a no go, so yours are awesome. I can finally show the wife and and family some of the ‘hills' we endured. I have attached a couple of photos of why Qantas sucks.

Just read your Etape report, epic day! Well done, 5000m of climbing fark. I think we finished about 4 mins apart in actual times. It would have been nice to had some people around to get some form of tempo off, and some help on the flats. The guys I caught up with on the flats were riding side by side into the wind, gumbies. It's always a learning curve this cycling thing, next time, get there a few days earlier, ride some plane swelling out of the legs and maybe slightly readjust the body clock.

It sucks to be home, but after 6000km driving I had just about had enough. Back to the millstone, but also back to riding. However, New Zealand roads suck; rounded a corner yesterday, hit some gravel and ended up smearing myself across the road! How to look gumby!

Well with the start to the holiday, 9 hours in flight delays and having to be re-routed through Heathrow, not direct to Frankfurt.  Then on arriving finally, to see my bike box completely destroyed and waiting for me with the airline rep, on top of a distinct lack of sleep, I didn’t take it too well. The best travelled of the three of us was Tallulah, little trooper. 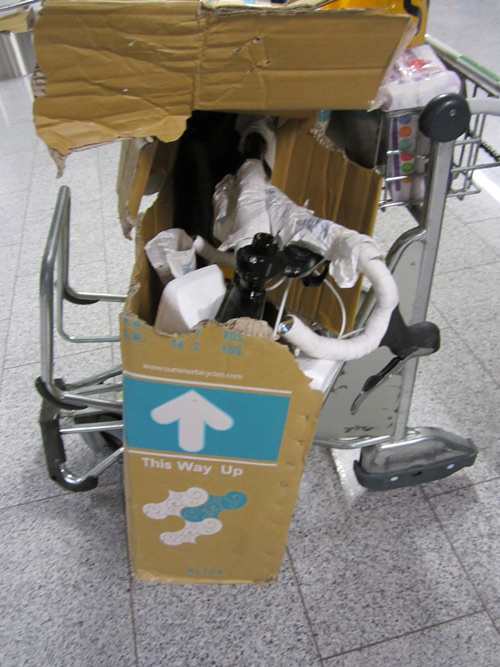 Anyways, yesterday morning, up at 4.45am, as the starting pens (just like animals) opened at 5am! Sarah dropped me through Modane and I dawdled to my start pen. There was no rush.  Seeing as I was given the bib number 8125 and was to start in pen 10 of 12, there wasn’t going to be a lot of racing from this far back.  So I stood in my pen from about 6.30 till my pen opened at around 8.  It was freezing, so much so that I had shiver induced speed wobbles for quite some time.

Once underway, I was pleasantly surprised by the openness of the ride.  It was just a constant smattering of riders pretty much for me for the whole 109Km.  There wasn’t a clear stretch of road ever!

It was a gentle 14km 50-60Km/h descent to the bottom of the Telegraphe, then a left hand turn and “hello climb”. I soon warmed up, and the arm warmers were dispatched not to be seen again. I have to say never having climbed these types of ‘hills’ before I was a little concerned.  So the aim was to stay well clear of any redline madness.  So tempo it was and it worked fine, just constantly passing smaller bib numbers than mine. What a fantastic climb: trees and shade, good tunes in the ears and amazing views. Boy howdy do you get up high.  Soon the valley floor looked Lego-like.

Well that all ended nicely after a quick ride into Valloire (gone in a flash but gorgeous), then unlike the hello I got at the bottom of the Telegraphe, the Galibier was a bit more of a hard slap on the back from that uncle that you don’t really like, except when he’s drunk and you get a bit of a laugh.

Anyhoo, so it was straight into the 9-10% climb, and unlike the tree lined lower slopes, the sun was starting to warm up nicely. Well I thought, this is cool where’s the hard bit.  Slap in the face this time.  A hard right turn and right’o, now we are talking, a quick 12% slog to warm the arms and legs up, and still passing lots of smaller bibs.

Well to say it’s unrelenting is an understatement.  It just keeps coming for you, rearing up and taking you down a notch or two. It’s about here I will say, I made it to the top without standing up once, and it was only here that I dropped into my granny gear of 27 (I was NOT running a compact or triple thank you!). There was carnage spread along this part of the climb.  Scarily not even at the 50Km mark, people were walking, sitting, lying, scrambling for the road side streams and the odd person with a complete mechanical failure (like the guy at hairpin 19 on the Alpe, walking with his rear deraillieur dragging, I know, a bit ahead of the story). It gets uglier at the top, but only just.

Then they take a photo of you,  generally with your ‘I’m dead but pretending this is easy’ face on [Ed: so true], definitely not next top models at this stage.

And like that, you are there: no fanfare, no one handing me a newspaper or a magic bottle of water. And down you go: bare cliff sided roads, switchbacks galore and generally crazy French men descending like bowling balls. Partway down it was time for a water stop: bodies everywhere just shove your way through, then watch yourself shoved out of the way. In a spot of complete genius (yes I will take that), I asked the attendee to fill my bottles from a bucket filling with the dripping hoses – in and out 1 minute! Back to the business at hand, drink, eat and watch for those corners. At 60-70Km/h the corners were hairy.  I don’t know how the tour boys will get down here in bunches faster than that.  Mad.

Now, the descent was fun.  Nearly 50Km all up, with some bumps along the way. But far worse than corners and crazy Frenchies are those voids in the mountainside they call tunnels. First issue, a very quick transition from light to dark, then some amber tubes to help your line and aim for the light at the end of the tunnel (see what I did there). Well they weren’t too bad, except for the very last one, and it was plain scary sh!t. It was pitch black, no amber lights and all of a sudden the guy whose wheel you were following just disappeared – completely and utterly gone. Boy howdy did we pull up quick. The universally accepted ‘whoa up’ was well used.  Again, point at the light and hope. The later riders weren’t so lucky.  Apparently there were a couple of really bad crashes and the gendarmes stopped you riding through (bullet dodged).  1Km in cleats, in the dark, on a pot-holed road – maybe the organiser was a physio wanting work on sprained ankles?

So into Le Bourg-D’Oisans, a quick ‘go damo’ from the support crew, a right hand bend, down a rise over a timing plate and there’s that thing that lurked under your bed as a kid and made you dive into bed from a few feet away so it couldn’t get you by the feet: l’Alpe d’Huez.

Unfortunately there was no jumping this monster, straight into my 27, and so began the humbling lesson for the day. Now fighting off cramp after hairpin 15 (I had stood up at this point) I was probably taking toxic doses of Cramp Stop but it worked.  It was nice to read on one of the hairpins that every Thursday there is a time trial of the 21 hairpins – all yours. I suggest to anyone who rides this particular ‘hill’ that you don’t look up, I’ll call it ascentigo, the fear of the height you will have to ride up. When you see a small helmet like a bobbing M&M above you, it really knocks the wind out of you.  So eyes on the road and off the side it was (so much for my fear of heights).

Finally everything was hurting, but not as much as those who were walking, or worse still those not walking (people had stopped at the first hairpin, poor fools). Here I was in my Andy Schleck styles, shirt undone, skinny white chest poking out, but man it was hot, my bottles were fast evaporating out of me, and then there was hairpin 1. I had done it.  No Damien you hadn’t.  A nasty wall and into the village.

Now there were cheers and claps, cramp had gone, I hadn’t red-lined once but I had ridden to my level. I was passed by only 3-4 riders on the Alpe (yes, it’s easy to count ‘cause you try to go with them!) and I had succeeded in passing some bibs in the 1000’s and plenty from the 100’s (sponsor invites I think). There is a little downhill (actually probably flat but I know it wasn’t pointing up) then 500m to go so why the hell not, sprint boy go on.

It’s a long finish from the left hand corner.  You’d better be an ox to go from there or the guy on your wheel will eat you – TdF riders beware. So I went.  Can’t wait to see the power reading (probably only 400watts though seeing how I felt but it seemed more like 1200watts).

I had made it.

L’Etape du Tour complete.  I only stopped for food and water, I climbed the Telegraphe and Galibier on my seat, and I made it up the Alpe. But the biggest prize for the day goes to Sarah.  She drove a honking great 4 berth camper from Modane to Alpe-D’huez via, and not just past, but over the Glandon, by herself with Tallulah. I’ve been stressed just driving in a straight line on the wrong side of the road.

Got Your Own Etape, TDF or Cycling Story or Report?

Then email me the details and I'll check it out!