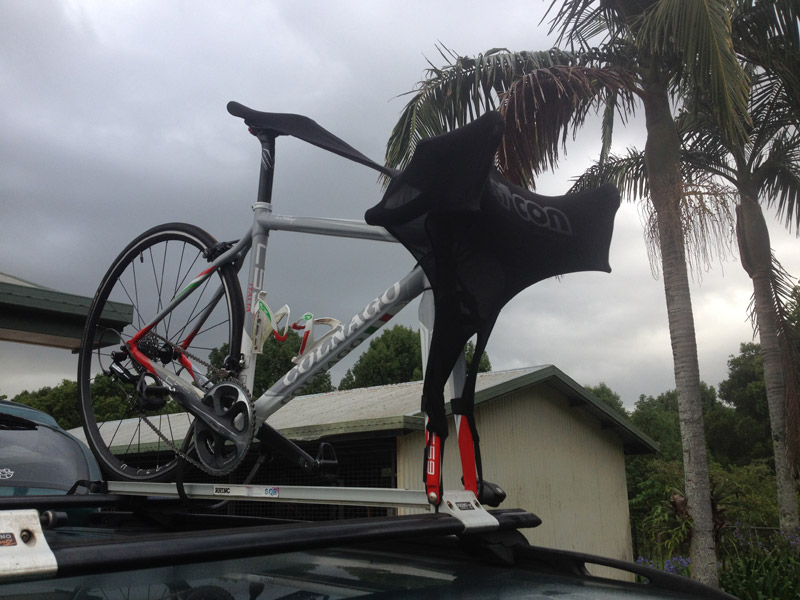 In undertaking this Scicon Bike Defender review, it became patently obvious that every travelling cyclist should own one.

This past Christmas, Mrs Velonomad, Velonomad Head of Chook Herding, Poppins the Golden Retriever, and I drove a round trip of around 4000km to Melbourne and back to visit family. My precious Colnago was to be atop the car, as we had a lot of luggage to take down and return with.

Due to the size and sheer number of bugs I knew would be encountered en-route, I knew I needed protection for my bike. I’d heard of dried bugs not only being difficult to remove, but also pulling paint from a bike when being scraped off.

Additionally, I knew the bike would need protection from airborne stones, dislodged by oncoming cars and trucks. For those not familiar with Australian roads, some of our highways—including about 700km of the Pacific Highway which we’d be travelling on—are single carriageways (i.e. not separated dual carriageways like the delightfully smooth Autobahns and Peages of Europe). Moreover, the road surfaces can often best be characterised as being akin to to a road post WW2 RAF or Luftwaffe bombing run. That is, a shocking goat track.

After just 900km (our place to Sydney), it was obvious to me the Scicon Bike Defender had done an admirable job in repelling an onslaught of kamikaze bugs. Not only was the entire bike bug-carcass-free, the only evidence of the journey was some rain spots.

The image below shows the results after 900km, upon arrival in Sydney.

Bugs after another 900km

There were no bugs in the chain or rear derailleur and no bugs on the forks.

If you look at the bike when it’s mounted on the roof, the Scicon Bike Defender completely protects the entire profile of the bike. That is to say, no part of the frame is visible behind the Bike Defender.

Fitting the Scicon Bike Defender is reasonably straightforward: simply slide it over the bars and levers, pull the saddle cover back and secure on the saddle.

However, fitting the Bike Defender to the forks is a bit fiddly. Ostensibly, you should cover the leading edge of the forks and secure them midway down the fork using the velcro tabs.

At the bottom (on the bike rack), there are two reinforced hoops. However, the hoops don’t seem to logically (or naturally) go anywhere: do you loop them under the bike rack skewer? Or under the dropout itself (so the hoop is jammed between the dropout and skewer)?

It wasn’t obvious to me, so I just looped the hoops under the dropout so it was jammed between the skewer and dropout. You can’t simply loop it under the skewer on my bike racks (RhinoSportz) as the ends of the skewers lie flush against the mounting point.

Because I had to loop under the dropout, there’s a risk the hoops (which appear to be plain clothing elastic) or excess lycra could get damaged.

I reckon this needs to be looked at and improved.

The Scicon Bike Defender is made of lycra. My observations in watching other cars passing with Bike Defender-shod bikes, was that the addition of the lycra didn’t seem to provide too much wind resistance.

However, my rather unscientific measurements seem to indicate a fuel economy penalty of around 3-5% through increased wind resistance.

After 1800km, a hole appeared in my Bike Defender (shown in the image below). Fortunately, this is repairable via some stitching, or, at a pinch, some hot glue or gaffer tape. We drove home around 1900km without the hole worsening.

If however your Bike Defender suffers irreparable holes, they’re not expensive to replace, especially given the cost to repaint your bike or repair damaged carbon (from a stone).

The Scicon Bike Defender is an effective tool to protect your bike when travelling with your bike mounted to your vehicle roof. In fact not only is it effective, I view it as essential.

You can get the Scicon Bike Defender online (availability may vary) from the providers below. Remember, these are mainly affiliate links and if you click from a purchase I'll get a small commission which helps pay the bills!

The Scicon Bike Defender is an effective tool to protect your bike when travelling with your bike mounted to your vehicle roof. In fact not only is it effective, I view it as essential.

Next Post: Specialized Roubaix SWorks Review: Reasons You Should Be Riding the Roubaix