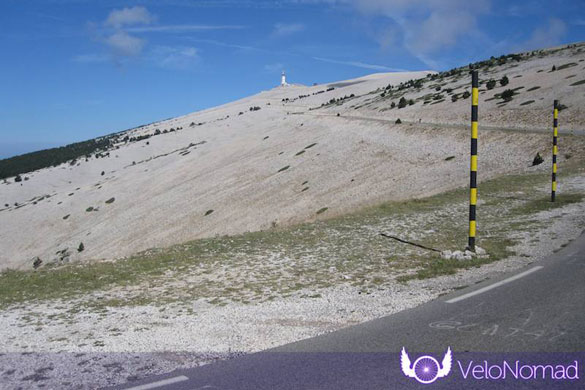 “Mont Ventoux training: is it necessary?”, you ask.

Ah, Mont Ventoux. My favourite climb in the world (by a mile).

Many cyclists have seen Le Geant on TV or read about it. Its eerie moonscape-like upper slopes beckon with a challenge. But you'll find the Mont's slopes littered with the broken dreams of thousands of cyclists.

Most cyclists have an understanding that Mont Ventoux is difficult.

But most cyclists don't have a true understanding how hard it is.

Sure, you can just “turn up” and attempt these epic climbs, but is that what you want? Do you want to spend all that money and time on your dream trip, only to find yourself walking up Mont Ventoux. Or worse-still, having to abandon your attempt.

Nope, I didn't think so.

Let me discuss why most people will need some Mont Ventoux Training before tackling the trying to tame this beast.

The initial approach to Mont Ventoux is a delight. The gentle ascent through rolling and dry Mediterranean hills, affords you sweeping views up to the summit. Or if that vista strikes fear into your heart, cast your eyes southward toward the Mediterranean. But I'm warning you: even these “flattish” initial kilometres will test the unprepared.

After winding your way through a little village, you soon approach the fearsome left-hand turn. This marks the climb proper.

Here's where Mont Ventoux tests your training, or lack thereof.

These 10km of unrelenting ascending are at an average grade of 10%. It's here you'll appreciate having heeded my advice to do some Mont Ventoux training.

In all honesty, this is just about the hardest stretch of cycling you're likely to do.

It's here the Mont tests your spirit for the final stages. The road rises through pine tree forests which shield you from the wind but leave you exposed to the sun.

After a spiteful hairpin, the forest opens into scrubby trees. You'll start seeing the summit in its stark glory, and the views to the east and the Alps will distract you temporarily. 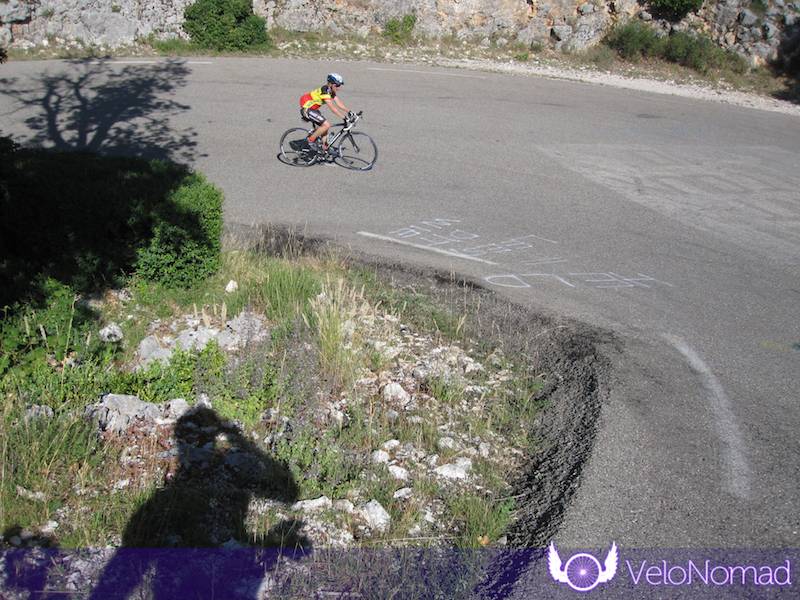 The nasty hairpin, chased by a pesky Belgian

After passing the relative quiet of Chalet Reynard, you now face a final assault that borders on the spiritual. Call it an out-of-body religious experience. Call it transcendental survival. Call it being completely at-one with your body. Or just call it mad.

Gravity fights you and the Mistral winds may buffet you. There is nowhere to hide on the cruel, exposed road that never lets up.

Whatever you do, just don't call it quits.

As you can see, climbing Mont Ventoux can border on the insane for the ill-prepared. (And it's even more insane if you do it three times in a day.)

But it is an amazing experience, so you owe it to yourself to maximise your enjoyment of the climb.

So, what about that Mont Ventoux Training.

What type of Mont Ventoux Training?

Here's the thing. Most people's idea of training is not commensurate with the sheer scale and length of climbs like mont Ventoux.

And most cyclist's idea of “hills” are not even close to what you'll face in France.

Here's what reader Shaun said about his training for the Tourmalet:

“In retrospect, I should have sought out longer climbs on the East coast. In PA, the longest climbs in the area was about a mile…just not enough.”

Even if you do a bit of racing and riding and think yourself fit, you'll likely be under-prepared.

Depending on your fitness, most people will need to do some form of training for 16 weeks or more. And if you're going to be riding quite a bit in the mountains of France, well, some training just makes sense.

So if you're serious about enjoying the ride up Mont Ventoux, you can get a week of Mont Ventoux training free here: get your free training.

Not only will it make you stronger, it'll help you avoid climbing Mont Ventoux in misery, or worse, having to abandon.

Previous Post: Are wider rims better: I ask a wheelbuilder