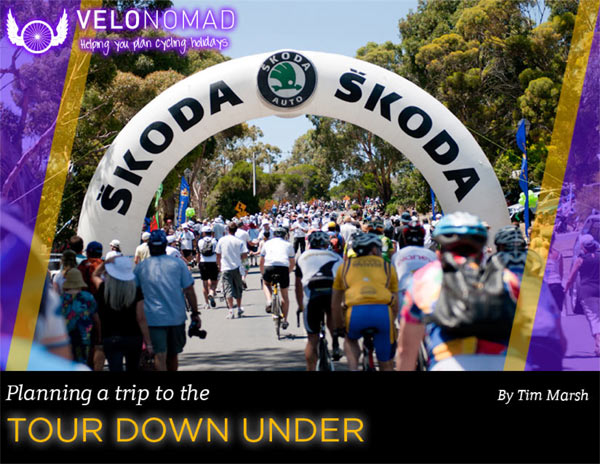 Why Visit the Tour Down Under

Welcome to the Tour Down Under Information page where you'll find key information for what I think is one of the best spectator events around in cycling.

The Tour Down Under is an amazing Pro Tour event held annually in Adelaide, Australia.

Australia holds a certain mystique amongst foreigners – we're far, far away, we're hilarious, we love beer and have strange animals. We also have very hot weather and even enjoy riding in it.

Regardless of whether you live outside Australia, or are a local, I highly recommend checking out the Tour Down Under.

The TDU provides an unparalleled opportunity to mix with the riders each day, and witness multiple passes of each stage.

In my opinion it's more fun than doing the Tour de France.

The Tour Down Under is a laid back, cruisey event far removed from the pressure and highly regimented organisation of something like the Tour de France.

Tour Down Under Guide

The Tour Down Under Guide is available 3 ways.

The Tour Down Under Information Page

This Visiting the Tour Down Under Information page is broken down into the following sections. Feel free to skip to the areas of interest. 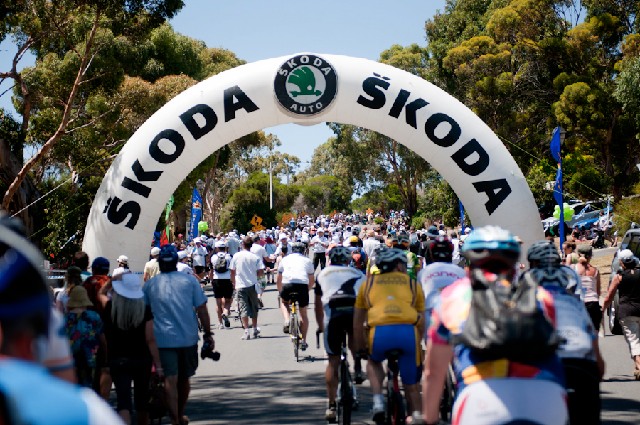 The major cost for international visitors will be airfares, though it's cheaper to fly to Australia than from Australia.

Australia is quite an expensive place to visit with a high cost of living. If you're visiting on Euro or Sterling though, I think you'll find it much of a muchness and you'll have a reasonable amount of purchasing power.

For those coming from Europe, the UK, the States, Canada and Asia, going out for dinner can be an expensive exercise, although the quality and diversity of food in Australia is excellent (more on this later). There's a wide variety of price points and generally speaking a decent dinner will cost you at least AUD$20 for a main.

There are plenty of cost saving ideas such as the ones below.

Getting to Australia means long haul flights. If you're coming from Asia, the middle east, the EU or UK, the good news is you'll likely be flying on newer planes like A380s and Boeing 777s.

Qantas and Emirates have formed an alliance (read more about the Qantas Emirates alliance) which is going to be awesome for those flying to Australia from Europe, the UK and middle east.

Adelaide is served by the following airlines (with airline code):

Adelaide Airport's website has the most up to date information.

The SkyScanner widget below will help you find flights.

Cheap Flights to Adelaide
Please be aware that if you click on flights via the Skyscanner widgets I might receive a small commission.

One great option is to fly into (or out of) Adelaide airport and into or out of a different airport like Melbourne.

For international visitors, the best baggage allowances are on Singapore (35kg), Emirates (30kg but you can push it to 35kg) and Virgin Australia (2x23kg). If you're a Qantas Club member you'll also get 2x23kg.

For locals, your best bet is on Virgin or a Qantas flight (not Jetstar). I am able to get my bike and gear for four days into an EVOC bike bag and keep under 23kg when flying domestically.

Make sure you book your entire trip on one ticket through to Adelaide. If you book a domestic stand alone flight, you'll be subject to the baggage limitations of that domestic ticket and Australian domestic baggage allowances are very restrictive.

I'll have a baggage tool to help you find the best baggage allowances for your flight available very soon. Make sure you're on the VeloNomad mailing list to find out when it's ready.

So, bringing your bike from overseas is very doable. Make sure you check out the Bike Bag Reviews page and Taking Your Bike Overseas article for more information on taking your bike overseas on the plane.

Watching the TDU is pretty awesome.

One of the best parts of the TDU is you stay in one place and ride out of Adelaide (which does not take long) with lots of other cyclists to one of the vantage points.

Often, you'll be able to watch several passings of the peloton. This is usually true of the Willunga stage where you can smash out to the beach to watch a sprint then head up Willunga to watch peloton pass twice.

The police protecting the TDU are MUCH more laid back than the TDF gendarmes. You'll be able to ride up the road in the same, or opposite, direction to the race until just a few minutes before the lead riders appear.

As soon as the last riders pass you can alight your bike and keep going.

There are none of these getting-pulled-off-the-road-6-hours-before-the-riders-appear shenanigans (yes this happened to me, TDF Stage 13 2009).

You can even smash back down off Old Willunga Hill into Willunga to watch the finish AFTER the riders pass over the hill.

After each stage you will often ride back with the actual riders which is awesome (especially when you burn off the Liquigas lightweights). 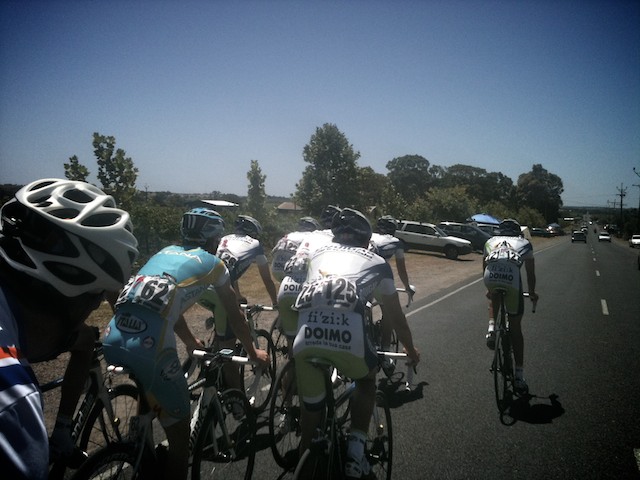 Riding back with team Liquigas

Most Aussie pubs in Adelaide will have the TDU on during the day (if not, just ask them!). In France you can sometimes struggle to find a pub with the Tour on.

Stage information for the Tour Down Under.

Your best bet is to stay in Adelaide.

There'll be a large influx of visitors so you'll want to book by October the year before to make sure you secure accommodation.

Although there'll be lots of accommodation in surrounding areas like the wine regions, staying in Adelaide gives you access to a lot more restaurants and also drinks with the riders each night at the Hilton.

Most hotels like the Hilton, Stamford and so on have hotels in Adelaide. You can find plenty of accommodation on Wotif.com or Expedia.

Please note the Wotif and Expedia links are affiliate links – if you book via these links, I get a small commission. More on my disclosure and income policy here.

Whilst not on the same level as Etape du Tour, the BUPA Community Challenge is a 127km sportif with options for shorter lengths.

Entries usually fill but entries remain open until mid January or about 2 weeks before the TDU.

Adelaide is blessed with loads of climbing (the Adelaide Hills) right outside Adelaide.

Within 30 minutes of leaving your CBD hotel you can be in the hills.

Your best bet is to simply pick a vantage point for the day then ride out to it.

You'll find loads of other cyclists doing the same thing and can just tack on with them.

Generally there will be one KOM each day so you can head out to that, or else a sprint point then head for a pub to watch the finish.

Hahndorf is an awesome old German town which is readily accessible by bike.

If you're an Aussie visiting the TDU, skip this section as it's likely you'll already have internet on your smartphone.

Australia is a funny old place. Wired internet in hotels can range from being heinously expensive to “free” (you and I both know “free” means it's built into the cost).

We don't have broadband everywhere, so if you stay outside Adelaide you might not have access to fast reliable internet.

However, wireless internet is a different kettle of fish.

There are three providers of wireless internet (or mobile broadband) in Australia – Telstra, Optus and Vodafone. Telstra by far and away have the biggest and best network, which is progressively being upgraded to LTE or 4G.

Most smartphones will work on all the Australian networks. If you're from the USA, make double sure of this as the US operates, or used to, mobile networks on different spectrums to those in many other countries.

I've tested an iPhone 3GS and iPhone 4 on Australian networks and European networks and both work on Orange France, Vodafone Spain/France/Suisse/Germany so if you have a phone that works on these you'll be fine.

If you have a tablet, all providers have plans for tablets too but I think you're better off putting a SIM in your phone then tethering to your phone.

These plans are generally for recharges. So you'll need a SIM first. These are available at telco outlets, lots of service stations (petrol stations), supermarkets and post offices.

You might need a passport to buy a SIM so make sure you have ID.

My advice is to stick to the Telstra network. Optus' network has much lower speeds and slightly less coverage and Vodafone's coverage is woeful outside metro areas.

Adelaide is blessed with some amazing – and I do mean AMAZING – wine regions nearby.

Don't be deterred by the distance of Coonawarra and Clare Valley – 140km is a quick day trip and 300km can be bookended onto a 2 day getaway.

If you're on a tight schedule, the Barossa and McLaren Valley offer outstanding wineries.

Some of my absolute favourite Shiraz and Cab Sav vineyards are in the Barossa including: McGuigan, Jacobs Creek, Wolf Blass, Lehman, Saltram, Henschke, Penfolds and many more.

I have to admit, Australia has the best selection of restaurants, cafes and food diversity anywhere in the world. Adelaide is no exception.

Even if you have special needs requirements like gluten free/coeliac, vegan or something else, you'll be fine as the variety of food available, and general understanding by restaurants of a broad range of requirements, ensures everyone is catered for.

Supermarkets all stock gluten free bread and other products as well as loads of vegan substitutes for bacon and so on.

The local seafood is seriously good with the Great Australian Bight, and Oz in general, being rich in great seafood.

Adelaide serves up some great steak as well.

Whilst Adelaide isn't as blessed with as much seriously great coffee as some other cities in Australia (like Melbourne), there are still a few great places to be found.

Many riders will head out to Glenelg each morning for a coffee so you won't have trouble finding people and following them west to the beach.

Your best bet is to check out wherespresso.com and if you have an iPhone, download the free app, which will help you find coffee.

Driving in Australia is pretty straightforward.

The roads are a lot quieter than in Europe.

There are no toll roads in Adelaide.

If you'd like help booking your trip in Adelaide, drop me a line as I can help book accommodation and plan itineraries.

Here are some useful articles for further reading.