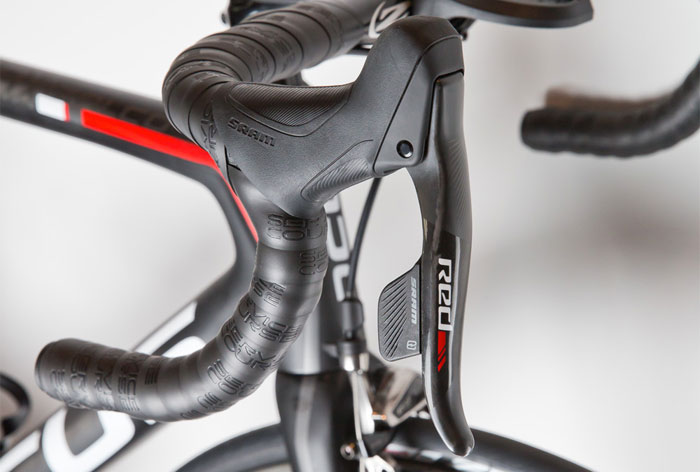 SRAMs new wireless group, SRAM Red eTap, is here: but is it for you?

For an indepth wrap up of SRAMs new group, check out Cycling Weekly (link at bottom of page).

New innovations are great, but always suit early uptakers (tech mavens) and those with deep pockets (in this case, very, very deep) who can inevitably deal with 1st Gen stuff-ups and frustration (iPhone 1 and 2, anyone?). We need these early buyers though as they ensure sustainability of a product.

And so it will be with SRAM eTap.

However, the greatest innovation won't be in the group itself, it'll be what it enables. More on that at the end.

Now, I will caveat my thoughts by saying I still use 10 speed mechanical shifting (SRAM Red) and only have used Campag electronic shifting once (for 20 mins, but loved it).

I haven’t moved to electronic group purely due to cost considerations and geography. I live in a rural area and an electronic malfunction will result in a long rescue mission by Mrs Velonomad or an expensive taxi trip.

I also love the serviceability and reliability of mechanical group.

However, that’s not to say electronic wireless group doesn’t appeal.

As a concept (remembering I haven’t seen or used the group), though, here's what I like, dislike, or  am unconvinced/ambivalent about.

No more double tap. I like double tap. SRAM must not because they have retired double tap. You now use one lever for up, and one for down (and both for the front, more on that below). Multiple gear changes are asserted by holding the lever in. I know the pro teams have tested it, but this plain old amateur needs to test it. It sound dubious but in reality, after 1 or 2 rides, it will probably become second nature and Totally Awesome. (Then I'll look back on this post in 2018 and think “OMG, I was such a clown.”)

Pressing both levers at once…to shift the front derailleur seems a bit wacky. And after all, it's been tested by AG2R. Now AG2R is a French team, and you know what they say about the French (they're a bunch of wacky funsters). Could this be an extraordinary Franco plot to get everyone on SRAM and hamper their shifting?

I can just picture it now….

“Oui Oui Msr SRAM, le shifting is tres magnifique!”.
(Later that night: “Hey, Rene, zose silly Americains! I told them, le nouveau shifters are le magnifique!”
“Vous did quoi? Vous etes le wacky funster, Rene. We know les shifteurs are le merde! We are sure to have le victoire at Le Tour next year! I can even live with that zany Voeckler as long as it is a Frenchman!”)

Auto-sensing front derailleur:Yep, since you use both levers at once (I wonder what the sensitivity is like), there is no concept of up/down. Therefore the front derailleur will work out what chainring you're on and shift accordingly. Sounds great, but I hope it doesn't take 15 minutes to shift (like the pairing).

Wacky gearing: how will it handle things like my wacky 52/34 Q rings? Will it auto tune?

Satellite shifters:  yep stick remote/satellite shifters (SRAM call them Blips) on your TT bars, drops, stick them wherever you feel like. On your helmet, down your pants, go crazy! Problem is, they're wired, and connected via what SRAM are cutely calling a Blipbox (or control unit) which THEN connects wirelessly to the front and rear mechs. I'm puzzled by the need for wires. But the concept is good (if you ride TT bikes), though probably a bit gimmicky. What climber is going to need these on the flats? Real climbers won't want these: it's extra weight!

(In and of itself I like the firmware approach AS LONG as it's not buggy.)

Expensive! And only likely to come down in price as it moves to mass adoption (think, 2-3 years time). But at $2500AUD for the electronic bits ONLY* at current exchange rates (according to the price quoted by Cycling Weekly), that is an eye watering amount. For that sort of cash I could put together a pretty handy road bike or buy a second hand weapon in very good condition.

*You read that right, AUD$2500 for the shifters and mech only. Complete group? AUD$4300 at current exchange rates.

15 (yes FIFTEEN) minutes for the shifters to pair to the mechanicals? If Cycling Weekly's report is right…how on Earth does it take 15 minutes for 4 devices to work out who's who? What are they doing? Catching a plane back to SRAM headquarters for a pow-wow? Are they actually inventing the encryption and wireless algorithms by which they'll communicate? This is a truly extraordinary amount of time. I do hope it's a one off.

Edge cases/crashes: this might betray my lack of experience with electronic group but what if the firmware freezes/hangs/defenestrates (in the metaphorical sense obviously) itself? I will leave that question open to introduce some unresolved tension.

To me the most amount of awesomeness is reserved for what this enables.

I've said for ages that real time data-driven riding will be a boon not just for hard-core training but gamification (Strava).

Imagine what an electronic SRAM Red eTap group (or any similar group really) talking to your Garmin could do if it knew what your power limits and gearing were.

You could optimise your gearing across your entire ride, automagically. Your Garmin could sense cadence, power, speed and so on, and automatically change gears to minimise fatigue (for instance, during a 260km sportive you attempt with zero training.)

Or during targeted training, it could optimise cadence or power to ensure you hit your limits.

And on Strava KOMs it could preemptively change gears to optimise power output.

These are just Primary School ideas. I'll bet you smart readers can think of lots more.

So SRAM Red eTap: yes/no for the average rider?

Well Dear Reader, there's lots to like about the idea.

And for those with cash to burn, please get stuck in and buy lots of units so SRAM can really commoditise and improve it for 3th and 4th Gen models, making it priced for the masses by about 2017-18.

PS: I still don't know what happens if the firmware crashes!

Next Post: How to stop magpies swooping: the shocking truth