We arrived to Melbourne airport with my precious Look packed carefully away. I've described how to do this before, but I'll re-iterate how important it is to pack your bike properly. Here's the link to my video showing how I pack my bike in an EVOC bike bag (check out my EVOC bike bag review here). 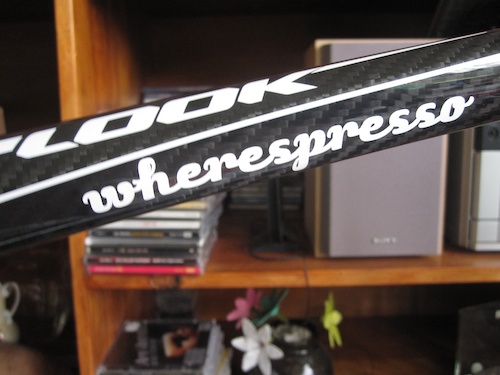 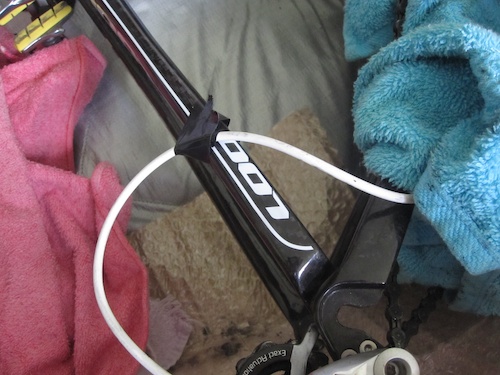 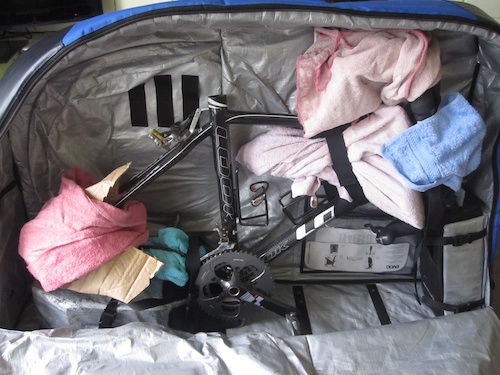 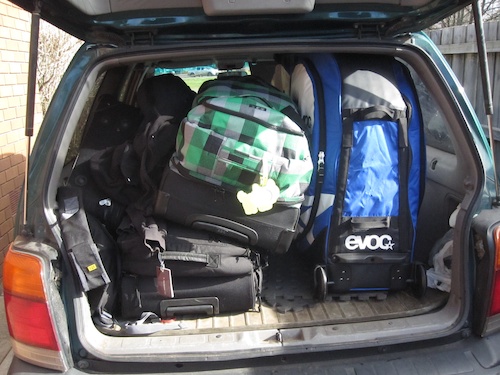 We got to the airport too early due to a suspicious time mix up that resulted in a serendipitous visit to the Melbourne Airport Qantas International Qantas Lounge. I can't speak highly of the lounge enough. Excellent service. Chips, ice cream. Epic. I was on the Baileys, Chivas, Wine.

Swiftwick Compression Socks. GET SOME. 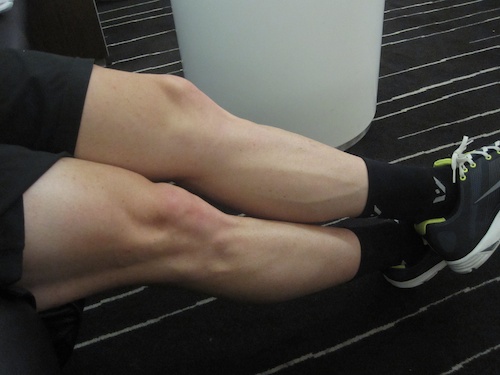 Lots of people looked a bit strangely at this funny looking little mountain goat in compression socks with shaved legs.

Big ups to Qantas. They have packaged an excellent product.

We rolled onto the A380, which I haven't flown on yet and got seated. The seats had excellent pitch and what looked like carbon bike weave for seat shells. Very appropriate eye candy for cyclists. UNFORTUNATELY we were seated next to a couple who due to cultural differences, snorted the whole way. Not cocaine, but just snot through their noses. I had to call the lady out who said she had a cold. Hmmm. (There's something to be said for business/first class upgrades on points.)

Did I mention the SNORTING. Blerrrrrrt.

I dig the A380, except the lack of toilets. I suppose you could always wander into business for a toilet stop (I am joking, kinda) but it is certainly baffling that there is such a lack of toilets (unless they were hidden elsewhere).

Anyway, Qantas have packaged their A380 offering pretty well, EXCEPT where the hell is the soy milk? In this day and age, there is no excuse for an Anglo (especially an Aussie National Flag Carrier) to not have soy milk. Plenty of people (plenty) drink soy.

I had ordered Kate a gluten intolerant meal which was meant to come with no wheat or dairy products. She got eggs in her meals which was ultra disappointing as she went hungry the whole time. Trust me, we packed other food (like Rice Puffs) but without soy….Rice Puffs and water is a little boring.

Even the hostie told us she was shocked that she couldn't get soy either. Why even offer a gluten intolerant/no dairy meal but provide eggs? Errrrrrm.

I even Tweeted @QantasAirways and rang them (twice) to ask about soy and they said the gluten intolerant meal was dairy free. They were very specific. This was REALLY disappointing as most Asian airlines provide soy AND Kate is allergic to milk/dairy products. It's made worse by the fact she can't eat most of the food on board. I know it's REALLY hard for airlines. But, soy milk. Really? Come on Qantas. Make that happen.

I whiled away the time watching Entourage, dranking Bacardi and sleeping like a mofo. We arrived in Changi soon thereafter.

We landed in Changi with no time for a shower in the Qantas Club. A travesty I am sure you'll agree.

Straight on board for leg 2 of the Kangaroo Route into Heathrow. Straight back next to the snorters. I got stuck into the water and tried to sleep as we were landing early morning.

After a boring flight of sleep, movies, a too-spicy (but delicious) curry we arrived in London then walked 154 km to our BA flight to Paris. Again no time for the lounge. Grrrr.

We arrived in Paris to a hot smoggy day. My bike didn't make the plane at LHR and we were told it would be 3 hours. An Eastern Euro princess next to me was falling apart at her missing baggage.

We went and waited outside customs (no baggage scans or anything) and 3 hours later I went back in….hmmm my bike had arrived a mere hour after us on a rush flight.

We got a cab to the camper depot and spent an hour with the taxi driver not knowing What Le Fricking Hell was going on. He got lost. We drove away from de Gaulle but 30 mins later…went straight back past. Lost. Ended up at the depot after an hour, to a 85 Eu cab fare. It tallied to 95 Eu but he didn't accept credit cards so I told him 90 Eu would do as he got lost. Joker.

VeloNomad Tip: BRING A GOOGLE MAP from the airport to your camper depot.

The camper place was fine but the guy showing us the ins and outs spoke NO English (unlike our fine friend Hans up at McRent Frankfurt), luckily I took my own advice and had done some French so could comprends des Francais. We got going and out of Paris quickly. After about 4 hours driving we pulled over for sleep and dinner at a Court Paille in Nitry on the tollway. 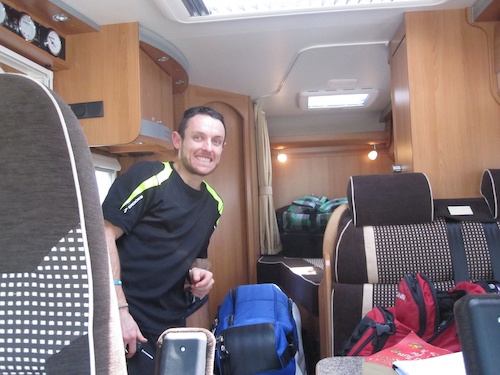 Here's an excellent example of why you should wear 7″ Swiftwicks or 2XU Compression leggings on international flights. More on Swiftwick in an upcoming review. 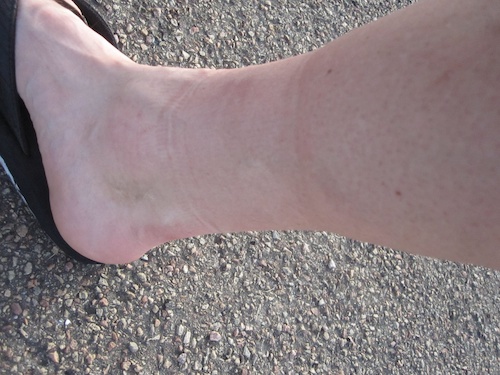 I had EXCELLENT chargrilled chicken and chips and beer. We were parked near a cool town called Nitry. At about 9PM we went to sleep in the carpark whilst everyone was still eating and drinking looking at our camper. We were beat!

This tshirt turned out to be prophetic. Though I had it made 3 years ago and have worn it to the last 3 Tours with no luck, this time, it was to be lucky! Or perhaps it was Kate. She at least insisted it was her. 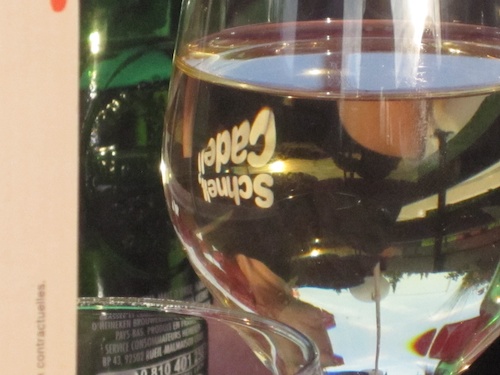 Art. Life imitates it. Cadel, schnelling, and a portent of things to come. 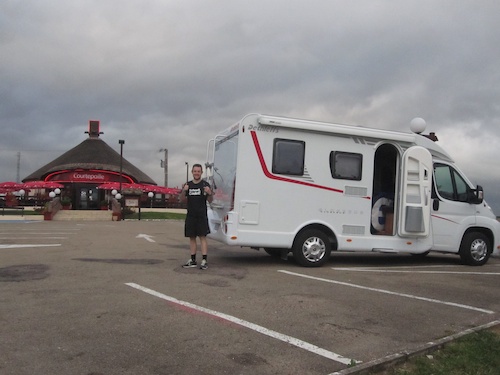 Camped in the carpark

We woke and walked into Nitry at about 6.30AM and got delicious soft buttery croissants. Kate nearly flipped out—she'd never had a croissant like it. (Yes the gluten free thing went out the window, but turns out French bread is a lot higher quality than the typically mass produced Western rubbish.)

Here I am experiencing cultural landmarks on Day 3. An excellent effort. 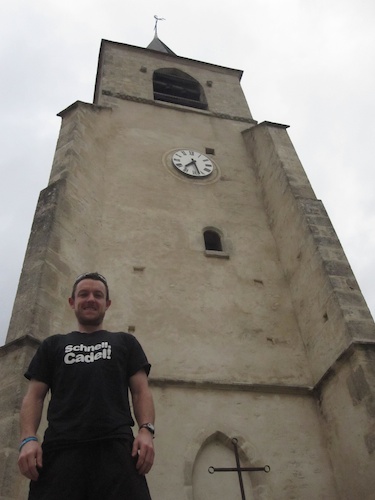 We got going toward Lake Geneva. We had planned to go to Montreaux for the jazz festival.

On the road we passed these trucks carrying clearly marked Uranium products. No police. Hmmm. 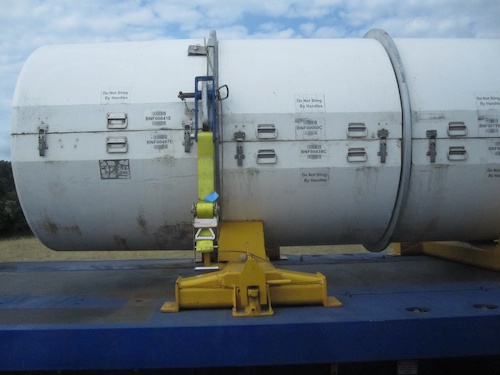 We got into Evian (yes, where the water is from) in the arvo and found a parking spot and walked along the lake into town for food. Got awesome pizza and watched Le Tour. Montreaux proved too hard this time.

After that, we found a camping spot at a love place called Vielle Eglise on the south shore of Lake Geneva after getting advice from L'Office de Tourisme.

The old lady spoke a little English and I spoke enough French to get a booking done. We had a nice spot, it was warm, we had a view of the lake, parfait!

View from our camp site. 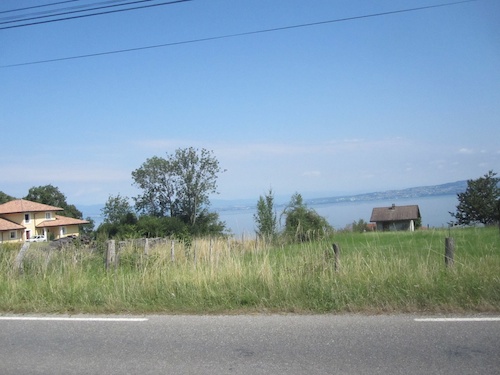 Driving takes up a lot of time!