La Marmotte is a gran fondo sportif organised by Sport Communication, covering an epic 174km loop through the High Alps in France.

Although L'Etape du Tour (arguably) has a bigger public profile, a bigger field and is a larger event than La Marmotte, La Marmotte is one of – if not the – the hardest single day sportifs.

Whilst La Marmotte is a gran fondo or sportif – mainly for participation – it still can be considered a race. (There are winners of the event, and if there are winners, it's a race as far as I'm concerned!).

Who can do La Marmotte?

La Marmotte can be done by anyone, as long as you are race fit or have done some specific training.

VeloNomad did an extended version of La Marmotte in 2011, by tacking an extra 80km on to Etape 2011 and climbing over the Cols du Glandon and Croix de Fer. You can see the ride below from Garmin (also on Strava).

VeloNomad had done 3 x 12 week training blocks and was in serious shape at least compared to the people VeloNomad was racing against back home.

But even with 36 weeks of concentrated training, and 3 years of racing, VeloNomad sadly got smashed. (Read more about Etape 2011.)

So unless you're ultra fit, it might be worth considering doing some training (check out the VeloNomad Etape training plan which is perfect for La Marmotte).

Here's a 3D traverse of the Galibier from Valloire down to the Col du Lautaret (courtesy of Cycling the Alps. It might not look like much, but the Galibier is truly epic. (Again, some training makes some sense.)

Have a look at the Cyclefilm.com La Marmotte recce digital download to get an idea of what's involved.

Entries usually sell out right away, but some entries (entry only or as part of a package) are usually available from tour providers like CycloMundo and French Cycling Holidays.

It's best to try and register online, and if that fails, use a tour operator.

The Marmotte online registration can be unreliable, so if you want to make really sure about getting a place, pay a little more and go via a tour operator.

For those flying in from overseas (e.g. Australia), the best international airports to fly into are:

Grenoble airport is only 50km away and is served by Ryanair, EasyJet and some other small airlines.

Alternatively, you could fly into Paris, Nice or Milan and do some driving to get to the start.

If you decide to do La Marmotte, it makes sense to book accommodation as soon as possible.

Check the Bourg D'Oisans Tourist Office website as a starting point, or book a spot at the Colporteur camping ground in Bourg D'Oisans.

There are lots of small towns in the area like Allemond, and La Grave – a big ski resort – is only 28km uphill from the start.

Reader Peter wrote in after this article was originally punished to say:

A friend and I stayed for a week in Les Deux Alpes a few years ago and did all the major climbs from the Oisans valley.
Would recommend it as a base and its also a VTT mecca in the summertime if you want to mix it up a bit between road and mountain biking.
Much more accommodation options than Bourg d’ Oisans or the other little hamlets, also pools and even skiing on the glacier all year round.
Also if you don’t want to climb back up to Les Deux Alpes from Bourg you can go up a valley at the back on the D530 to a little village called Venosc and catch the cable car up to Les Deux Alpes.

Peter also mentioned some accommodation might have a 1 week minimum. This isn't a bad thing as you can just stay in the area for a week and do lots of riding.

La Marmotte starts in Bourg D'Oisan and finishes on L'Alpe D'Huez after 176km.

It traverses the Col du Glandon, the Telegraphe, Col du Galibier in a clockwise direction. That's 3 HCs and a Cat 1. Yikes.

La Marmotte will see you scale these mountains:

The climbs themselves are actually very hard in and of themselves; these are Hors Categorie climbs after all! Their difficulty is exacerbated if you are pushing it trying to hold on to faster riders.

The Col du Glandon from the Bourg D'Oisans side is horrible, HORRIBLE (read about VeloNomad's Glandon showdown from Etape 2011). Rising through verdant forests, you'll fortunately be ascending before the heat of the day so hopefully avoid the stifling humidity. The ride is quite steep and a real grind. 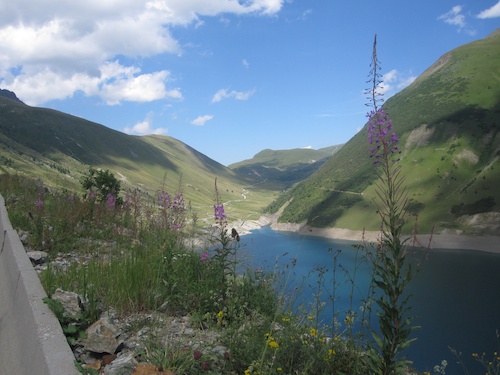 On the Croix de Fer and Glandon

The Telegraphe isn't too bad; you can certainly get a nice tempo going after the initial uplift from the Maurienne valley floor. The views are spectacular and you'll probably want to snap off a few photos. There's a short descent down into Vailloire before the ascent up the Galibier commences. 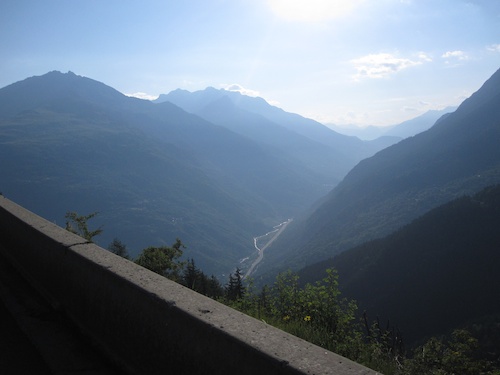 The Galibier is probably one of the most spectacular climbs VeloNomad has done. VeloNomad doesn't really consider it a nice tempo climb apart from a couple of sections. It's a long grind with some long straight sections pointing directly uphill. This can be most deflating at times. 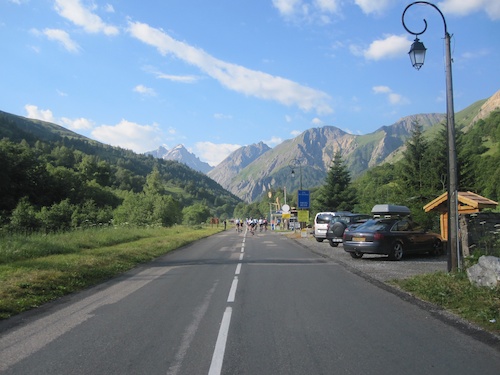 Looking up to the Galibier 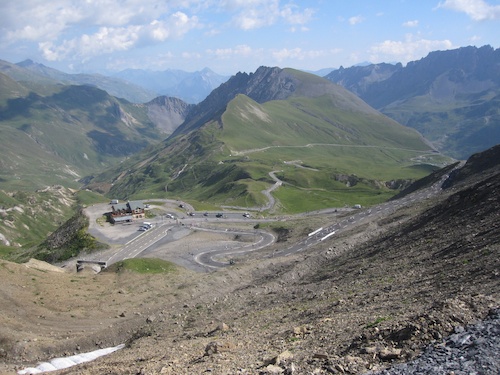 The Alpe D'Huez needs no introduction. It is here that you'll be thanking VeloNomad for his sage advice about compacts or a 28 or 32 cassette (you can buy VeloNomad a beer sometime). 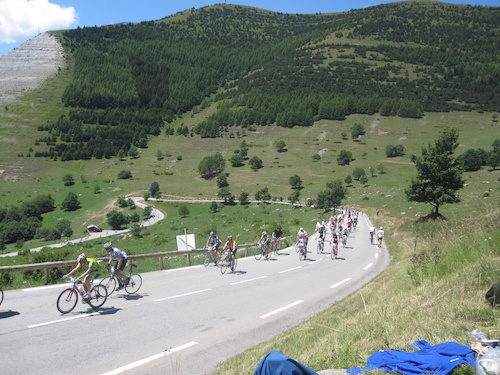 On the Alpe D'Huez

Race numbers are assigned according to past Marmotte performance and if you haven't done Marmotte before, your number is based on your racing experience and experience and results in other sportifs.

Each participant is timed with the timer starting once they cross the start line.

Riders are awarded a silver or gold according to their age and time.

The first 10km or so sees full road closures, but unlike Etape the entire course is not subject to rolling closures so you'll need to be careful.

The Alpe d'Huez is closed to vehicles from 2PM to 6PM on the day, so if you have a support crew, you'll need to plan for that.

The weather in the French Alps can vary markedly both from day to day and during the day.

When packing for this event, pack clothing for super hot days (40C) and freezing cold and wet weather.

Days can start cold in the Alps and get hot very quickly.

If the forecast is for hot weather, try and minimise the amount of extra clothing you'll need to peel off like arm and leg warmers.

It almost always makes sense to take a wind vest or gilet for the descents. When you ascend in the heat you will get hot and sweaty. The summits can be very cool, and the descents can get very cold, so it's easy to catch a cold or get very cold.

Be aware there may be snow around, either on the ground or falling from the sky. Be ready for anything! 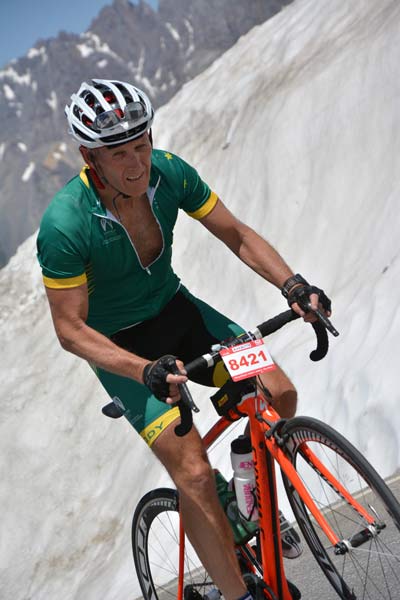 VN Reader Mike on the Galibier in Marmotte 2013

You can basically ride down off the mountain.

There is an alternate way down to Allemond which requires a turn at Huez (a small village part of the way up the mountain) – turn down Avenue du Moulin.

There are several food and water stops along the route. 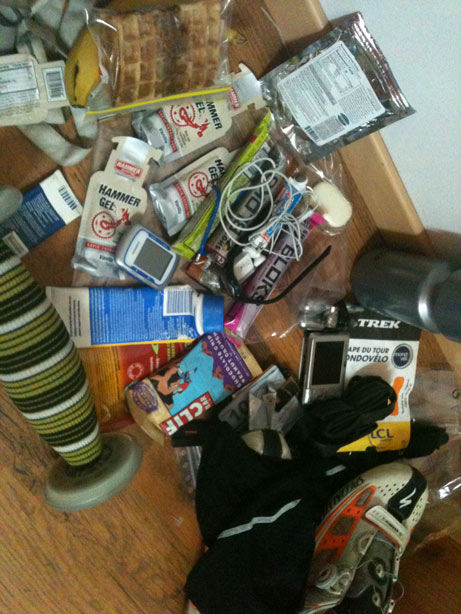 Although it's likely that the food available at refreshment stops will be adequate and suitable, there are a couple of things to consider with the food and drink stops.

VeloNomad's personal preference for events like this is to take his own food and use water stops where needed (but only if needed). Remember though, you will probably need to add an electrolyte mix to water to help prevent cramp and maintain condition.

VeloNomad uses and recommend Sukkie, SIS (SIS gel and powder review) and Hammer electrolyte and hydration stuff. Sukkie is probably the most tooth-friendly, and the other two do work effectively.

As mentioned earlier, just turning up to “do” La Marmotte – without some serious training – will likely be a recipe for disaster.

VeloNomad has ridden with people who trained for Etape for 6 months and still abandoned, so he can imagine what would happen if you turned up to Marmotte without any training!

What you need, depending on your fitness, is somewhere between 12 and 26 weeks of training. And in actual fact, some people may need more.

VeloNomad has a range of training available for La Marmotte (and other epic sportifs).

All the plans are on the VeloNomad cycling training page.

If you prefer to simply wrack up time on the bike for your training, try and find a program that that gives specific hill efforts and training. Don't just do lots of lazy coffee shop and group ride kilometres. 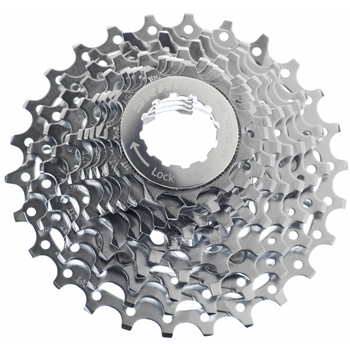 Most people will need to ride compacts on La Marmotte (read the VeloNomad Etape Gearing article for more insight into why).

Even a 39×28 will not be sufficient for most people.

VeloNomad rode a 36×28 (SRAM Red 52/36 crankset) when he did his version of Marmotte and he did not have sufficient gears. 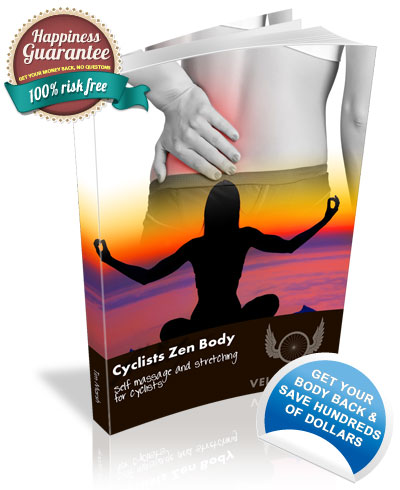 Most riders will incur some sort of degradation in body, which can be mitigated through proper nutrition before and during the event, as well as proper food and self-treatment (massage and stretching) post event.

The VeloNomad Self Massage and Stretching guide shows you how to apple self massage and stretching so you can recover fast. It's also awesome for day to day treatment of niggles and knots.

For more information on La Marmotte, check out the links below. 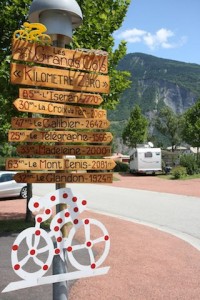 There is a lot of riding in the area. Choose from:

And not far away is Bourg St Maurice, a great base for more epic riding like the Cormet de Roselend, Col du Petit St Bernard and more.

Once you're there, you're close to Italy and Chamonix where there's MORE riding.

You might also consider entering the Grimpee de L'Alpe which is effectively a mass start time trial up the Alpe d'Huez the day after Marmotte.

It's sometimes possible to do Etape du Tour and La Marmotte depending on the timing of both events.

For instance in 2013, the Etape is the day after La Marmotte, which would make a fairly epic 2 day ride.

This is something like 300km+ depending on the Etape route, so it's pretty huge for most riders.

Most people probably wouldn't be able to do 2 rides like this on consecutive days so it might only be achievable by high intermediate to expert riders. Having said that, if you're more of a novice and feel up for it, go for it! (Just remember to train properly and recover properly.)

Even if La Marmotte and Etape are a few days or more apart you'll still need to train, fuel for Marmotte and recover properly, but it's a pretty attainable double ride, so VeloNomad says, go for it.