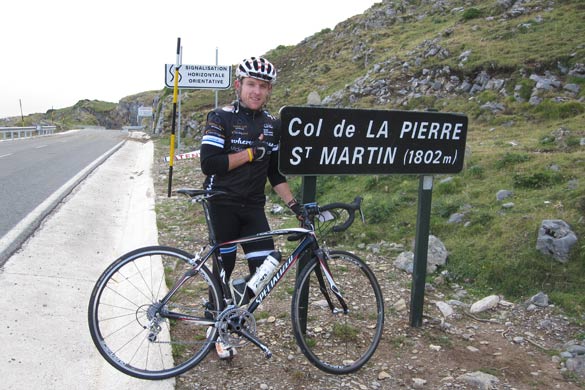 I remember delicious dinners, cold beers or local wines, going to sleep late and waking up to another warm day of exploring the area on bike or by car and bike.

About the Atlantic Pyrenees

The Atlantic Pyrenees, ou, “Pyrénées-Atlantiques” en Français, span from the Atlantic Ocean near Biarritz across to Lourdes and Tarbes in the East.

They border the Haute Pyrénées (or High Pyrenees) to the east.

The Atlantic Pyrenees have a very interesting history, being a cultural mix of the Basques and the Gascons. Interestingly, the Gascon language is a dialect of Occitan, itself a Romance language (isn't linguistic history fascinating!). Occitan is spoken in southern France, Italy's Occitan Valleys, Monaco, and Spain's Val d'Aran and is an official language in Catalonia.

Geographically, the Atlantic Pyrenees lack the great lakes and high mountain passes of the Alps, and maintain relatively uniform elevation. The lack of high passes is a blessing for Pyrenees Cycling Holidays, as it makes getting around much easier. The Atlantic Pyrenees are also older than the great Alps.

How to get to the Atlantic Pyrenees

Flying to the Atlantic Pyrenees is easy, with Toulouse being by far the most convenient international airport to fly into.

You can also fly into Nice, Lyon, Geneva or Barcelona and drive or catch a train to the Atlantic Pyrenees.

And if you fly into Paris, there's a TGV to Pau (that finishes in Tarbes). Paris to Pau is between 5-7 hours depending on the time of day. As Wife Kate would say, “what's better than a train trip!”

The Atlantic Pyrenees is replete with smaller villages and towns, so there is a lot of accommodation available.

From hotels to beautiful little bed and breakfasts, there's something for everyone.

I love the areas around Oloron-St-Marie and Pau. You could stay just over the border of the Hautes-Pyrenees, in Lourdes, and still tackle the Atlantic Pyrenees.

They're close to the major climbs and are delightful places.

Remember too, you can easily stay on the Spanish side where it's usually a lot cheaper.

I've stayed in Aramits, which is deep in Three Muskateers territory. It's a very quiet place, so stick to Oloron Sainte Marie or Pau if you want more things to see and do.

I love the Atlantic Pyrenees because everything is reasonably close, and easy to get to. And, actually, this is true for much of the Pyrenees.

You can ride to the closer mountains and for the mountains further away, drive to a town further afield, park, then ride.

Here's a ride we did from Aramits to the Aubisque and back.

One of my favourite rides is the Col de la Pierre St Martin out of Aramits. An absolutely epic climb, you can ride down into Spain, have a feed, then come back over into France. It's not often talked about, but I can tell you it's hard enough!

Be careful though, there are vultures and wolves around. And, riding up, and looking how desolate (yet beautiful) it is, real and unimagined nightmares quickly come to the forefront of your mind! 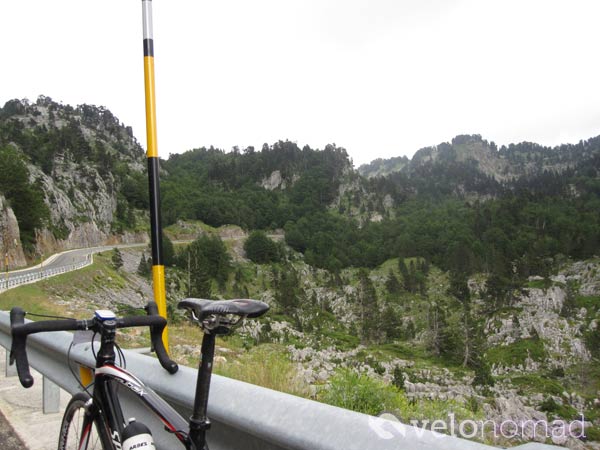 Getting Around the Atlantic Pyrenees

Getting around the Atlantic Pyrenees (and Pyrenees in general) is reasonably easy, with only a few really busy areas.

There aren't a lot of tollways in the Atlantic Pyrenees-proper, like there are in the Alps and because there isn't the same sheer size, it's a bit quicker getting around.

Many of the passes, even the smaller cols, will have cows and sheep being herded on them, so drive safely.

It's hard to answer that objectively as it depends on what you want.

Obviously, the Pyrenees don't have as many truly high and long climbs as the Alps.

But, they're a lot quieter, it's easier to get around and has a relaxed atmosphere.

Moreover, the blend of different cultures is very interesting.

One thing to bear in mind is that the Atlantic Pyrenees can get a bit of rain. When I was there, we had a run of sometimes-misty, drizzly days. We did have a few great sunny and hot days, but in my experience, I didn't have as many hot and dry days as I have in the Alps.

Here's an article I wrote about how to choose between the Alps and Pyrenees.

Now, planning a trip to enjoy the Pyrenees is easier than ever. I've taken all the information you need and compiled a special guide for Cycling the Atlantic Pyrenees.

Given how close together much of the riding in the Pyrenees is, this information and insight in this guide can easily be applied to a cycling trip to anywhere in the Pyrenees.

Get the guide that gives you all the tips and tricks for getting to the Atlantic Pyrenees for an epic cycling adventure including:

The guide is now available for immediate download (as a PDF) here. Or, read more about it here.

Next Post: How tall should cycling socks be: Optimum Sock Height