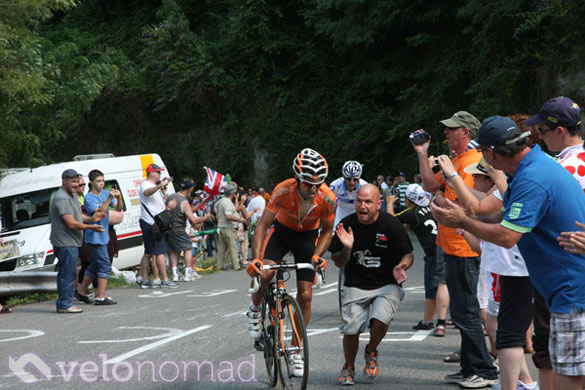 Whether it's the Tour de France, Giro, Paris-Roubaix, Tour Down Under or some other event, one thing is clear: when spectating at a big cycling event you must plan!

For example, watching a Tour de France stage isn't a case of just turning up; there is a lot of planning involved to make sure you don't miss out on watching the stage (believe me, it can happen!).

At a minimum, you'll need to consider:

I've been to quite a few Pro Tour events including Grand Tour stages. I've seen it all from successful days to missing seeing anything.

Here's some recounting of my experiences and insights, to whet your appetite.

What about other events?

Well, generally speaking, the Tour de France is so meticulously planned and tightly controlled that if you stick to the planning maxims in the above articles and scattered around VeloNomad, you will be fine.

For example the Tour Down Under is a much more laid back affair, with rolling road closures allowing much more movement between vantage points on the day. The police are more relaxed too.

Even the Giro d'Italia and Vuelta a Espana are laid back in comparison to Le Tour.

If you're heading to the Tour de France, check out my Cycling in France guide which covers the Tour stage.

Previous Post: Self Tour or Tour Group for Cycling Holidays