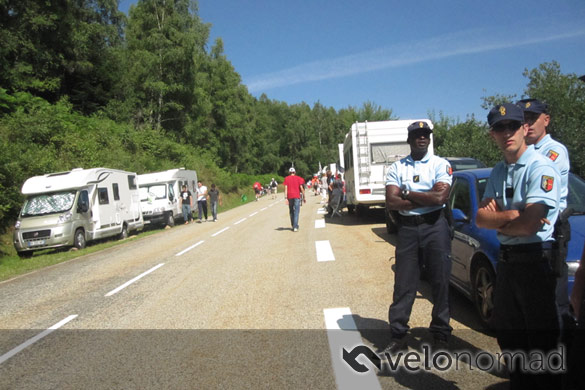 What to do when the Gendarme says: “Non!”

If you travel to France for Le Tour, chances are you will encounter a gendarme on the road preventing you from getting to your vantage point to watch the Tour.

I've been in the situation a few times now where we desperately needed to get up the road, but were stopped by an impenetrable wall of gendarme.

The best way to avoid this situation is to heed my advice here: Get to your vantage point early.

Basically the gendarmerie (on motorbikes) will sweep the road in both directions from about 1 hour before the lead riders’ arrival. In many cases, the cyclist will dismount as directed, very sincerely promise they won’t keep riding, wait for the gendarme to disappear up the road on his motorbike, then continue on their merry way.

Gendarmes are also positioned at key points on ascents and descents to block spectators from a certain time before the sponsors caravan arrives.

If you’re riding in the opposite direction to the stage, particularly up a Col, prepare to be pulled off your bike. In 2010, one of our friends attempted a sneaky gendarme bait-hoodwink and was successful. I personally don’t like leaving things to the good graces or laissez-faire attitude of an individual so I like to be there early.

Key Tips:
You are: 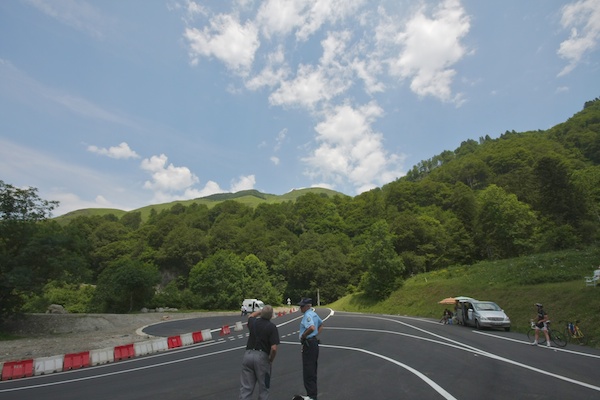 If you get told to get off your bike, get straight off it. Take your helmet off and put it on your handlebars. Tell the gendarme, “D’accord, n’est pas de probleme” (Ok, no problem). Then, walk up the road perhaps 50m and put your bike down. Sit down and relax. Allow the gendarme to relax. Look around. Take the sights in. Pretend to call someone on your phone. Blow your nose. Be casual.

Then, pick your bike up and fiddle with it (stay with me here, this will bear fruit). Take a couple of steps and sneak a look at the gendarme. If he’s oblivious, walk up the road a bit. Stop and sit down. Repeat. Hopefully you’re on a bend in the road, in which case, as soon as you’re out of sight, get on your bike and go.

If the gendarme seems overly conscientious, he’ll start waving his finger at you, perhaps even yelling “Non, non, non.” He might even curl his finger with a come-hither signal. Ignore said gendarme. This is part of the game. Whistle nonchalontly, perhaps whistling the Marsellaise. Sit down again.

The gendarme will stare at you. Intently. Ignore him (of course, if it’s a female gendarme, we need a whole other playbook, but that’s a story for another day).

Hopefully you’re with a few mates. At this point just start pushing your bikes up the hill, well off the road (this is critical). He might blow his whistle, or he might pretend to pull his Glock45 out. Ignore him.

If he looks at you and makes no move, you’re clear. Be cool. Stay off the road. Keep walking. Once he’s out of sight, you’re clear. Alight bike, and continue.

It's critical you stay off the road until out of sight. If he sees you're going to go regardless, but you're off the road, he'll probably relent and let you go.

At the end of the day, a gendarme probably isn’t going to arrest you or physically person-handle you off the road. He or she has to man that post and they can’t leave, so if you’re low-key and play it cool, you can always outflank the gendarmes.

And now, read on for our successes and failures in this area.

…we got to the final climb of the day very early, got parked, and went for a ride. We rode down to a small town and back to our van, some 6-7 hours before the tour was slated to roll through.

We had loads of time so headed back down the road again. At the turn around town, we saw some gendarmes arguing with some people at a blockade, and I knew if we kept going we’d be stopped from heading back up the road.

We stopped around 100m from the barricade and quickly made to turn around, but the gendarmes were onto us.

We were pulled to behind the barricades and I went beserk – the Tour was at least 5 hours away, our van was 45 mins ride up the road. I was not happy.

Other people were outflanking ze gendarmes and walking up the road, others were a mere 50m away and mounting their bikes; clearly there was no consistency to what was going on, which maddened me further.

There was no way around this town, so Michael began looking for a way around. We eventually ran up a very steep hill to a house under construction, and into a vineyard, through blackberry bushes.

Next challenge? Getting back down the hill to the road.

We had to get through a row of blackberries, then get down a 8ft vertical wall, into someone’s backyard, then down the side of their yard, where we were faced with a 20ft sheer drop.

In cycling gear, and in cleats, we had to shimmy along a wall that was only about 5 inches deep, so we had to go along it, holding our bikes in one hand and holding onto the fence with the other hand.

The inhabitants of the house were on the front verandah, looking at us with, I think, a sense of bemusement and confusion. I was just saying “Je suis desolee!”. I jumped down a 5 ft drop to their driveway, stamped the mud out of my cleats and ran to the road.

I jumped on my bike and got going, just to get going.

Boned – Stage 17, 2009
In 2009’s Stage 17, we left Bourg St Maurice for the Cormet de Roselend at around 11AM – long before the riders were due to start. By 9AM, the road up had already been barricaded even to cyclists. However, we ended up walking up the footpath about 50 metres then continuing on our ride up. Not one gendarme said a word.

We actually got halfway up the Cormet de Roselend before I thought we should turn around, as there were a heap of multiple switchbacks affording really good photo opportunities, plus the weather was coming in and I thought being atop a high peak in a storm would be folly.

Heading down the road, in the opposite direction to the Tour, we were stopped by a gendarme and told to head back up the road or sit and wait.

Looking back on it, we probably could have walked down.

This is where knowing some French is very handy. Being able to tell the gendarme in French you will walk down, and go to a spot for photos, is highly likely to satisfy him/her.

However, it ended up ok. We found a good switchback, got some good photos and ended up on TV.

As opposed to 2009, where it was just a mate and I, this time we had 6 or so people to get organised, which added a lot of time to deployment each morning onto the road.

Stage 16 afforded me the chance to snap off some photos on an epic hairpin (see photo below from L'Etape 2010).

Given the delay in hitting the road, and the fact we had to ride up from where we were pulled off the road in Ferrieres, we didn't allow enough time.

Ordinarily, I'd have parked the car and ridden up (the hairpin was only a few km up the road) but it was absolutely raining its head off, and I didn't fancy being in that weather with expensive camera gear, and without the requisite rain protection.

Had we arrived there earlier, and had I planned better, I probably could have just walked up. 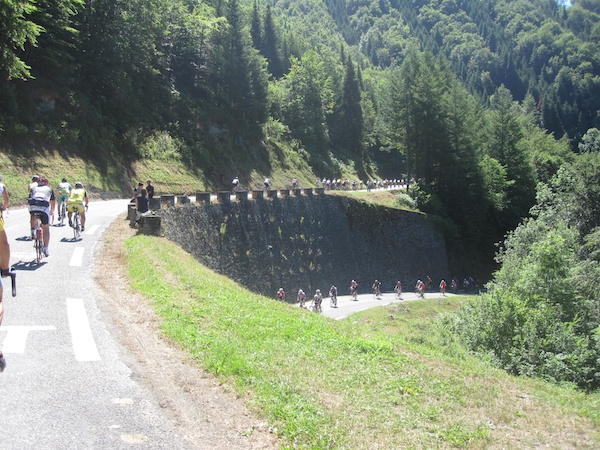 So, the clear lesson here is: stay cool, get there early, and be prepared to walk and accommodate the gendarme.

They are just there to do their job and keep everyone safe.

Next Post: How to Save Travel Documents on the iPhone Part 2