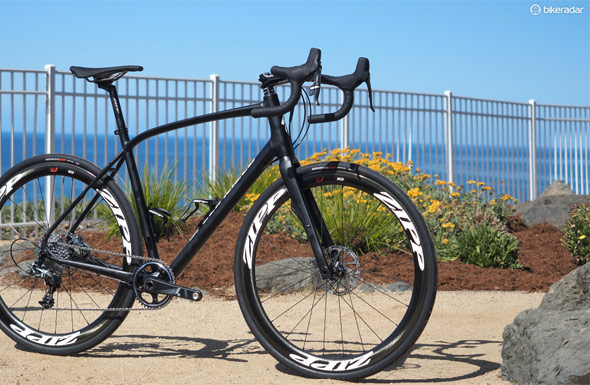 So, SRAM has done something interesting and put out a 1 chainring group set for the road market in their Force and Rival lines.

(Not to say SRAM don’t do interesting things, it just seemed an appropriate intro).

I’ll spare you the detail and marketing guff: step over to James Huang's wrap up on Bike Radar for the low down.

Now, on the face of it, this is a great idea. And look how elegant that bike above looks. Bloody awesome.

Simplification by eliminating a derailleur and chainring with consequently less weight (?) and more reliability.

Well, before you whip the credit card out (the one your significant other doesn't know about, perhaps?) to remain the most avante garde and cutting edge in your coffee shop ride, hold your horses because SRAM 1x is not going to be for everyone.

Instead, he says that the new 1x road groups merely presents another option that will particularly cater to certain niches, such as adventure riders and gravel racers who are looking to simplify their drivetrains and minimize the chance of mechanical failures, fitness riders who can benefit from a more intuitive one-handed sequential transmission, and anyone else who doesn’t necessarily need the full range that a 2x drivetrain offers, such as cyclocross racers, triathletes, criterium racers, and even everyday enthusiast road riders who live in flatter areas.

So, a single chain ring, what does this mean practically?

It ought to mean less weight too right? Not so.

Be warned that all of the omitted hardware won’t jettison a huge amount of weight if you want to make the switch to 1x. The rear derailleur is quite heavy and the bigger cassettes, naturally, weigh more than their typical road counterparts. We measured a loss of just 47g when switching from a Force 22 drivetrain with 50/34T chainrings and an 11-28T cassette to a Force 1 setup with a 44T ring and 11-36T cluster. Upgrading to the ultralight (but ultra-expensive) XX1 10-42T cassette, however, would shed another 100g or so.

Got that? A potentially expensive swap over for no weight saving.

After all, is it really all that hard to mentally manage front and rear shifting? I would argue no.

And what about for travelling cyclists, and climbing?

Since Velonomad’s remit is cycling travel and cycling adventures more generally, I’ll focus on this first.

Upon looking at 1x, I thought, well this might appear useful to those heading to the big mountains of Europe, right? If you’re riding up the Galibier you're mostly going to be in one gear and possibly need less gears overall.

So, a simpler set up makes sense, as you're likely going to be needing less gears, right?

Not so! You need a wide range of gears with spacing not too far apart when climbing these big mountains. (More on this below.)

What about gear range?

There's no advantage in terms of gear range to be gained by installing SRAM 1x.

On the face of it, a 42T cassette combined with an appropriately sized front ring (44T perhaps), provides a reasonable range. However, due the large range rear cassette, there are large gaps between gears, meaning you’ll potentially be left either spinning too high or too low a cadence if you’re “in between” gears.

Compared with a conventional 2×11 drivetrain with 50/34T chainrings and an 11-28T cassette, a 1x road setup with a 44T chainring and 11-36T cassette will provide the same lowest gear ratio for climbing but you’ll effectively lose the two highest ones. Conversely, switching to a 50T chainring and one of SRAM’s massive 10-42T cassettes (which, it should be noted, requires a special XD driver body) will also yield the same lowest gear but will actually provide slightly more range, but at the expense of some rather large ratio jumps from sprocket to sprocket.

As SRAM says, this is aimed at road, CX, gravel, adventure and triathletes.

If you do the bulk of your riding on largely flat roads (hi Beach Road Warriors), then SRAM 1x makes complete sense.

However, if, like me, the bulk of your riding is highly variable with climbs of 25%, flats and everything in between, the big jump between gears is not ideal. And, given the lack of clear weight advantages, this makes no sense.

Ok, so we still have the simplification through elimination of a chainring and derailleur, but is that a large enough payoff to lose more closely-spaced gears and less range?

And for those heading to France or the big climbs of Europe? Keep your double chain ring. You’ll need the small front ring going uphill and you’ll definitely need the large front gear for barrelling downhill. A 1x setup is likely to either see you short of a gear or two going uphill or spinning like a crazy person going downhill.

Save your dollars for something more worthwhile.

Previous Post: Tour of California: the logistics of racing in America