Here's a breakdown on how the Scicon-sponsored Tour of California teams manage their logistics and why they love the Aerocomfort 2 TSA bike bags.

California: a place that conjures up images of glamour, sunshine and Arnold Schwarzenegger driving around in an SUV powered by vegetable oil (also wine country, crippling traffic, snowboarding right near LA, baseball and epic weather). But for one week each year center-stage is hijacked by professional cyclists and their entourages.

The Amgen Tour of California seeks to emulate the European Grand Tours with a demanding course that traverses hundreds of miles of California’s iconic highways, byways and coastlines each Spring. It's divided up into 8 grueling stages with a cumulative distance of around 700 miles.

But as a travelling cyclist I'm particularly interested in the logistics behind the cycling teams and not the actual race itself. The vast majority of World Tour and Continental teams are based in Europe and the ‘journey to victory’ starts a long time before the race itself. 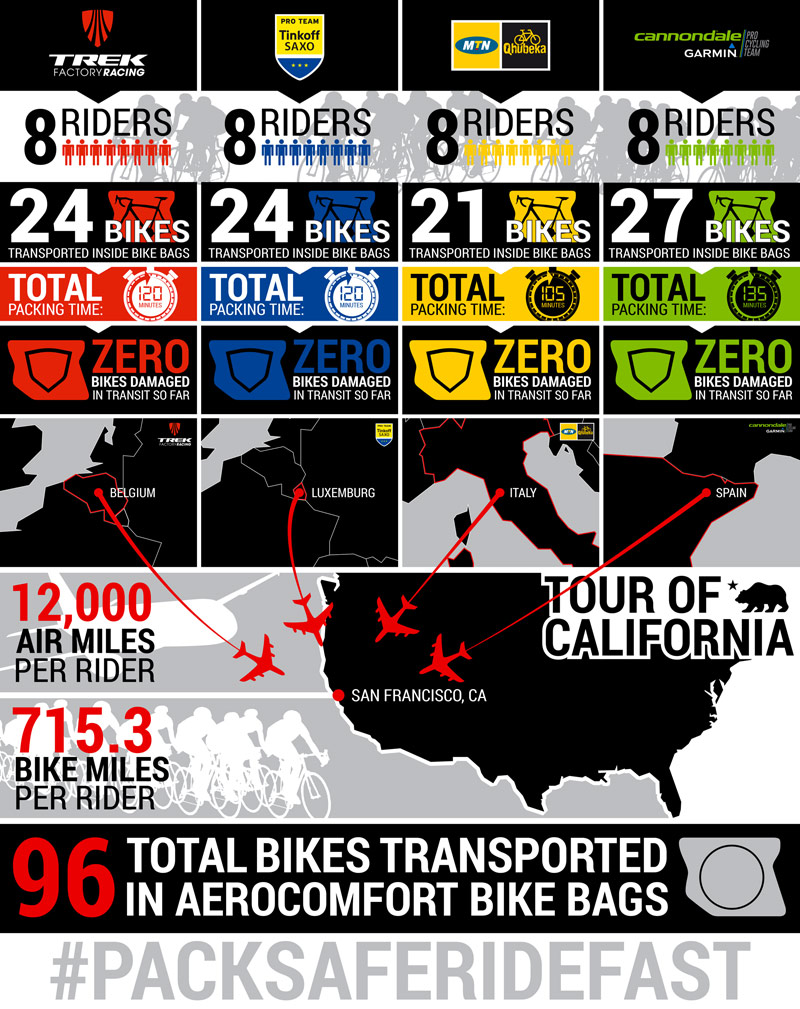 Scicon currently sponsor 9 professional cycling teams of which 4 are racing at this year’s Tour of California, Cannondale-Garmin, Trek Factory Racing, Tinkoff-Saxo and MTN-Qhubeka. Scicon, as bike bag manufacturer, play a huge role in facilitating safe transportation of thousands of bikes every year to and from races and training camps around the world.

As you can see, each of the 8 riders has 3 bikes: 1 road, 1 TT and 1 spare. Cannondale-Garmin also take a couple extra spares on top of that.

We currently book an average of 1100 flight tickets per year and that includes 240 bikes in bike bags to races like the Tour of Down Under, California, Colorado, Dubai, Qatar etc. and of course, also to our training camps.

Henriette also explained that they have a dedicated ‘overseas package’ which is always readily available at their service course in Luxembourg. This overseas package includes a list of spare bike parts, water bottles and nutrition as long as your arm. Here’s a simplified version of the equipment set aside for each rider in the form of an infographic: 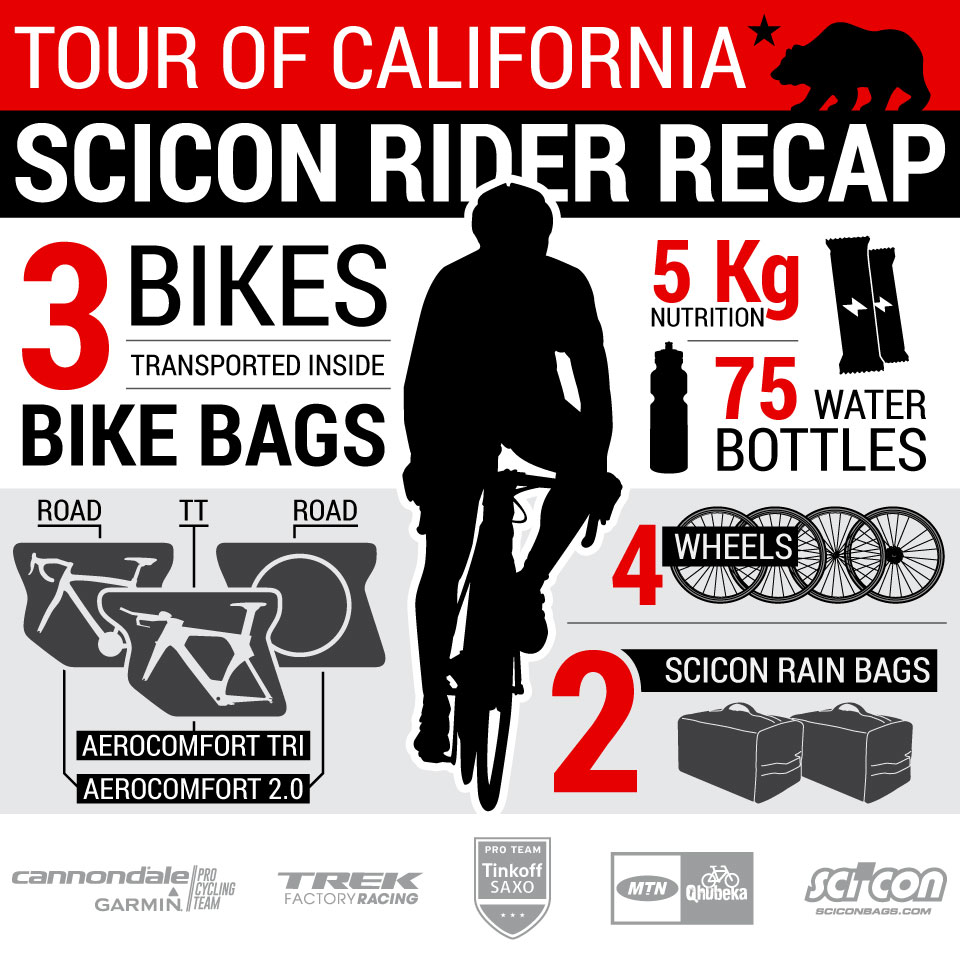 MTN-Qhubeka Team Principle Douglas Ryder explains to us that travel logistics play a huge role in his team as they are flying a lot further than other teams as many of their riders live in Africa:

60% of our riders live outside of Europe where the majority of races are held meaning we have to fly to races that other teams don’t have to.

Douglas goes on to state:

This is why having a good bike bag is so important. The AeroComfort is the best in the business and we want to get our riders out to races like the Tour of California in the best shape.

This year is in fact the first year that MTN-Qhubeka have been invited to participate at the TOC which makes it all the more important that they pack safe and ride fast!

Trek Factory Racing, on the other hand, have been racing the TOC since the team was founded in 2011 as Leopard Trek. Former rider Chris Horner actually won it back in 2011.

Scicon’s sponsorship of this team also began back in 2011. They have been travelling with the AeroComfort for 4 years now and Tim Vaderjeugd, Communications Manager, tells us:

We have complete faith in our Scicon Bags.

Something that all the teams seem to echo is the huge increase in the number of races outside of Europe. Head Mechanic at Cannondale-Garmin Geoff Brown claims:

The globalization of professional cycling is great for the sport, and it is critical for teams to get the equipment we need where it needs to be, safely – so we are lucky to have a sponsor like Scicon that helps ensure our equipment arrives in great condition for racing and training.

It means more work for Geoff but also more trips to exotic places too which I’m sure none of the riders and staff are complaining about! Cycling is, for most people including professional riders, about exploring new places, going on adventures and of course, looking stylish at the airport with their Team Edition AeroComfort 2.0 bike bags.

Watch the video below to see the 2015 collection of Team Edition AeroComfort 2.0s.

But why do so many teams choose to fly with Scicon? We currently sponsor 9 pro teams but in fact, a total of 20 teams are using this bike bag.

What sets the AeroComfort 2.0 apart exactly? Have a look at our product illustration below to get a better idea: 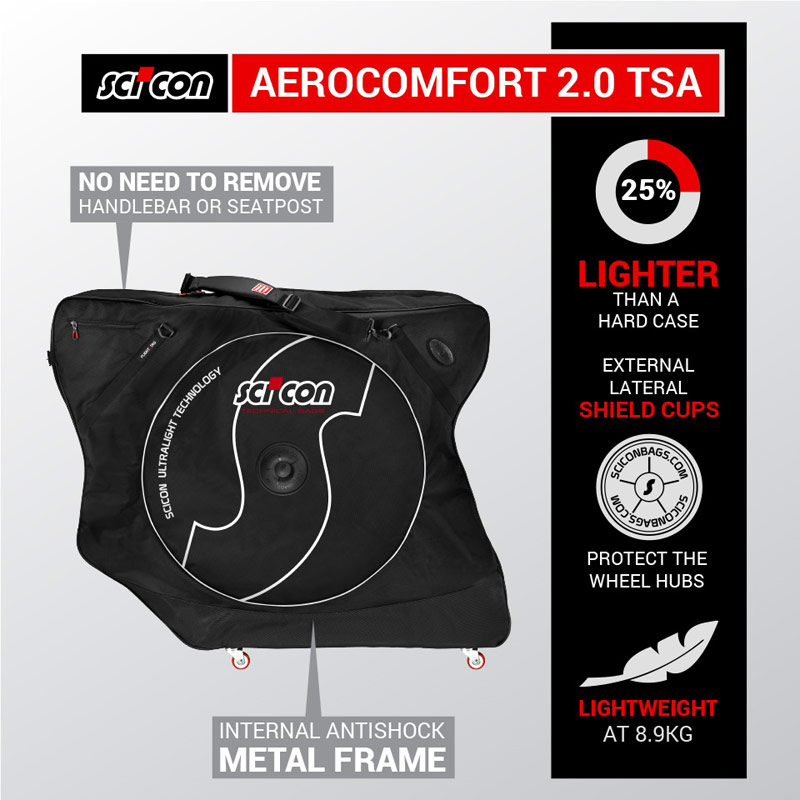 The TSA locks are obviously especially important for when the teams are flying across to races such as the Tour of California as the TSA can access the contents of the bike bag at customs.

The biggest benefit to the teams is the vast amount of money they save by using the AeroComfort as opposed to a bike box. This bike bag weighs 8.9kg, most teams’ bikes weigh around 6.8kg (as that’s the minimum allowed) so that totals just under 16kg which is within pretty much all airline baggage limits.

Whereas if the teams were using bike boxes, which usually weigh between 12-20kg, they might be pushed over into excess baggage fee territory.

Let's put that into real terms. A bike box which weighs in at 17.5kg (this weight is based on a leading bike box model), plus a 6.8kg bike = 24.3kg total weight. This compares to 15.7kg total (including bike) with the AeroComfort 2.0 TSA.

And let's take a standard airline company that many pro cycling teams including Cannondale-Garmin will be using to fly across to the Tour of California—Lufthansa—who are pretty reasonable when it comes to bike fees in comparison to some other airline companies.

They allow bikes on for free if under 23kg but will charge €100 ($150) each way if over the given allowance (inter-continental). This means that the total excess baggage charges for the four teams travelling to the Tour of California with the AeroComfort should be €0 whereas if they were travelling with a heavier bike box it would cost them roughly €4800 extra for a round trip. Bear in mind too that Lufthansa’s fees are quite low in comparison to some other airlines who charge per kg in excess and have more restrictive dimensional restrictions.

Scicon Aerocomforts at the airport and hotels

And this is just for one race. If we take the figure given to us by Tinkoff-Saxo of 240 bikes transported via plane per year to and from races and training camps then the total amount of excess baggage would be between €24,000—€36,000!

This is a huge amount of saving for a team, especially one with a more limited budget e.g. MTN-Qhubeka or a female team like Velocio-SRAM (who are racing in this year’s women’s Tour Of California). Also, some continental teams and almost all women’s teams don’t have a team bus or a large service course meaning that the riders tend to look after their own equipment. This means packing and flying out with their bike bag themselves, much like an amateur rider who participates in a lot of sportives and/or often goes on cycling holidays.

From professional mechanics to pro riders to cycling tourists, the AeroComfort 2.0 TSA is the number one choice in bike transportation worldwide with good reason.

I keep saying over and over how good the Scicon Aerocomfort 2 TSA and obviously the pro teams agree.

If you need convincing, head on over to my comprehensive Scicon Aerocomfort 2 TSA review and check it out.