We headed off early and continued to be interested by Andorra; it's certainly an interesting (and wealthy) place.

We had had a crap sleep as there seemed to be some sort of dance party all night in town. I think it stopped at 6AM, and was characterised by bloody jungle drums resounding through the valley all night.

My kingdom for a good sleep.

We took a wrong turn and ended up in La Vella, which is the, I guess, capital of Andorra – LOTS of shopping. What stood out for us was the widespread tobacco advertising.

We got back on track and headed for Spain, and, BORDER PATROL.

I think because of the cheap shopping (no tax) in Andorra, they have border control (tobacco, mainly). Most cars got waved through but we got waved in for an inspection. I cracked it a bit and the police man saw the frown and started gesticulating at me and carrying on.

He had a look inside the van, which had Kate's freshly washed undies hanging up drying, then shrugged his shoulders. He again asked if I had a problem, I said, no, no “No entiendo” (I don't understand). He asked if we had tobacco, I said no, I don't smoke.

The customs guy worked out it was all too hard, then said, on you go.

We drove down into Spain on absolutely crap roads and the landscape changed from typical Pyrenean green hills, to dry, dusty terrain.

It was not inviting. We headed west toward the Atlantic through endless bloody hills, very narrow roads, with eagles circling over pine forests.

The driving was nerve-wracking at times; small cars would come flying around blind corners like fighter jet cars driven by mad Spanish pilots.

I lost count of the times I had to slam the brakes on and swerve away off the road.

We eventually reached an old monastery called Boltana and camped for the night (AUD$50!).

Day 15 – Boltana to the Atlantic Coast

We headed off early and followed the GPS which we told to only direct us on major roads. We headed off on an awesome road which was a relief but somehow ended up on what can only be described as a goat track. A mountain pass was being re-surfaced as well as being upgraded to a major road with bridges and so on, and it was an absolute nightmare. Anyone who's driven the Hana highway around the back of Maui will know what I mean.

The interior of Spain in the Huesa province isn't nice at all. Sometimes, though, it's got some nice scenery. Lots of eagles around. 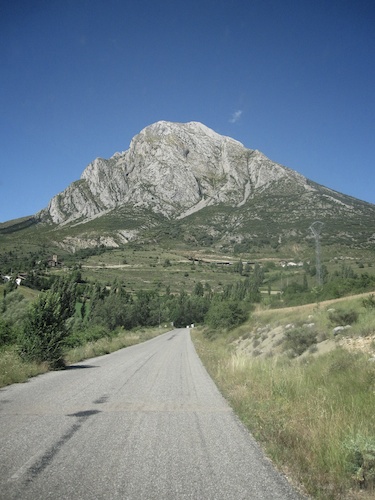 A hill in Huesca 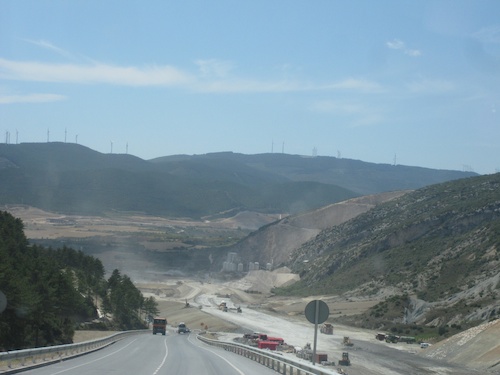 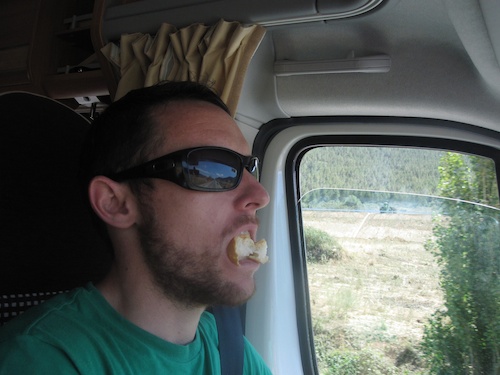 After some highly stressful moments we FINALLY hit Spanish autoroutes and got cracking.

We ended up in a town called Zarautz near San Sebastian where we planned to go, as VeloNomad reader Ben had told us the tapas were madness and the town was ace. Plus we thought we might have a surf.

We arrived to a cliff top camping ground full of people from all over the world, then settled in with some raciones, or as they're called there, pinxtos, then ordered way too much extra food.

The food and beer was more expensive in this part of Spain.

To be honest, we didn't like the Basque coast so far. Busy, dirty, uninviting and uncompelling.

We resolved to head west toward Santiago de Compostela.

The day dawned rainy and cold – any hopes for sunny hot weather looked dashed for the next few days at least.

I headed into town to a Vodafone for a prepaid SIM and was told there weren't any for iPhones (I am pretty sure there are). I bought a 3G dongle for the Macbook – which didn't work. I took the SIM out, put it in the iPhone and “hey presto!” it all started working…then stopped about 3 hours later, apart from tethering which seemed to work. Very strange.

We headed down to a coastal area called Ajo which is just being developed. The camp ground was absolutely horrible.

My kingdom for a hot shower where I don't have to keep pressing the button every 60 seconds – makes shaving a cyclists legs painful!

The area is totally uninviting so we make the call to bail for Barcelona and the Med Coast the next day – back to where we came from!

We left Ajo early and high tailed it across Spain. We went from one side to the other in about 7 hours! Had we looked into this properly, we could have saved all the time we spent on the Atlantic Coast (4 days driving etc) and spent it in the sun, but that's the way holidays go sometimes.

Lots of wind power in the central north part of Spain. I've never seen so many wind turbines. There also are a lot, and I mean A LOT, of VERY BIG eagles. They're as prolific as bloody Indian Mynahs in Melbourne. 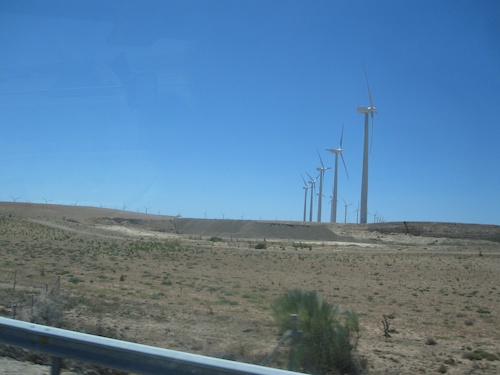 The weather on the Med side was about 12 degrees warmer and it was delightful. 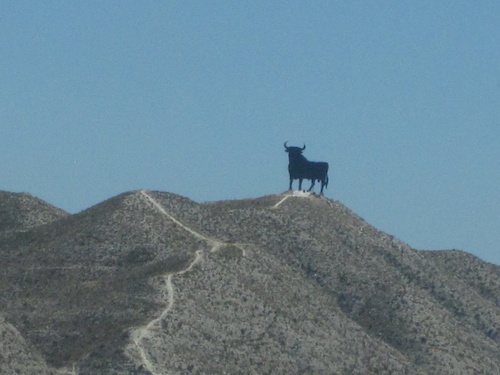 We headed for a place called L'Escala on the Costa Brava coast. We bypassed Barca as the camper is just too hard to take into a big city.

We got into L'Escala and found camping at Camping L'Escala right in the centre of town. “Town” was a very busy, touristy Spanish town with tiny streets. We pulled in then DISASTER STRUCK.

Whilst negotiating the tight entrance, I hit a pot plant on the side fairing. Instead of stopping, I kept going which then scraped down the side and cracked 2 fairings instead of 1. Ooops. All this occurred right in front of the bar/kitchen where everyone was.

I sat there quietly fuming (ok, I was loudly fuming) then went inside. The lady seemed nonplussed about her pot plants and was more concerned for me. Kate calmed me down with her quiet way. We got parked up and were delighted to discover the most modern, awesome toilet/shower block ever. Ahhh, civilisation!

We wandered down into the town proper for dinner and were blown away by the scenery. Just like a James Bond movie set on the Med. Stony beaches, old houses close to the water, it was awesome.

The next day we headed to the main beach where there's loads of cheapy shopping, and water-front bars and cafes. 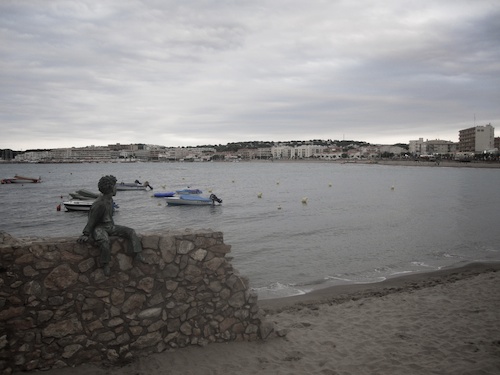 View across the beach

We basically spent 3 days doing nothing but relaxing.

Importantly, I was able to watch the critical TDF stages up the Galibier (S18), Alpe D'Huez (S19) and the TT. Cadel busted his guts and effectively won the Tour on Stages 18 and 19. We watched the TT the following day and watched as Cadel blew the Brothers Schleck into oblivion. I've been the last two years and it was awesome to be there the year he cracked it. Kate thinks she's his good luck charm now! 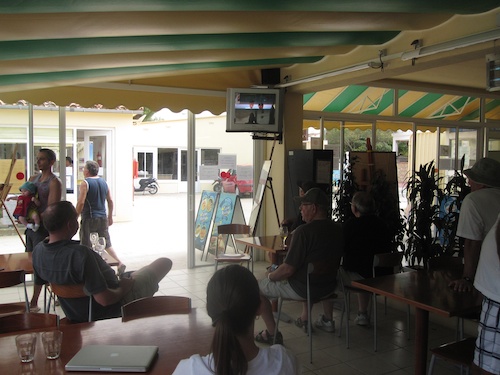 Where Were You When Cadel Won? 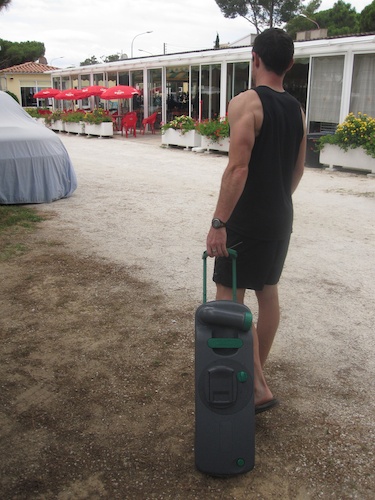 And in this Spring's Hot New Fashion, Walking the Toilet!

We visited some olllld ruins called Empuries, which is a mix of Greek and Roman cities. The Greeks snaffled the waterfront space (I can imagine how some Melbourne realestate agents might spin it “historical building in need of some TLC to restore it to its former splendour – suit the renovator or astute investor. Absolute water front views”) with the Romans tacking their more modern buildings on to the back. You have to hand it to the Romans – for all their faults, they knew how to maintain historical buildings and just add to them (the Alhambra is another startling example). 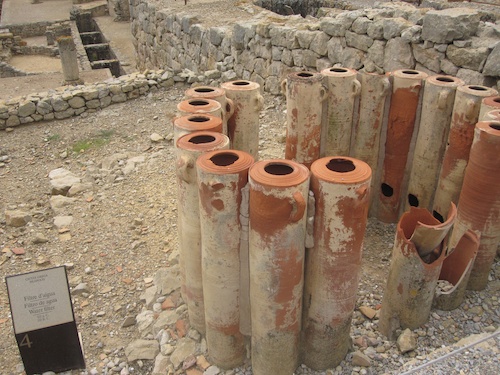 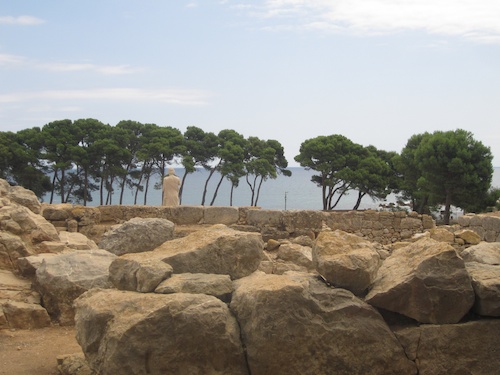 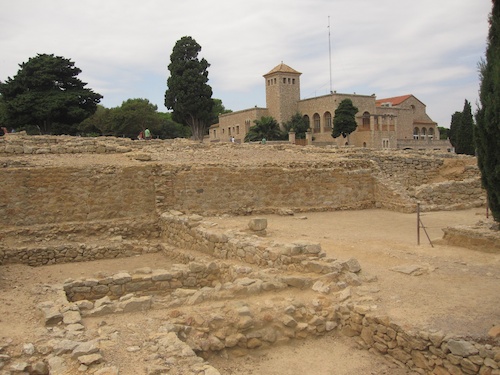 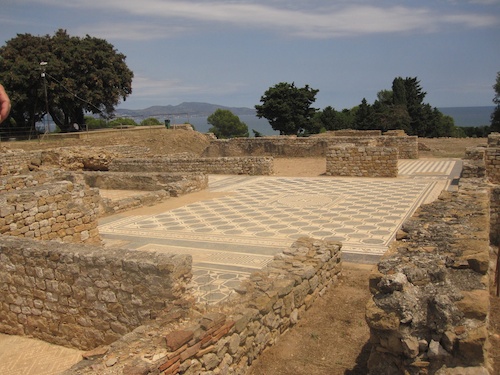 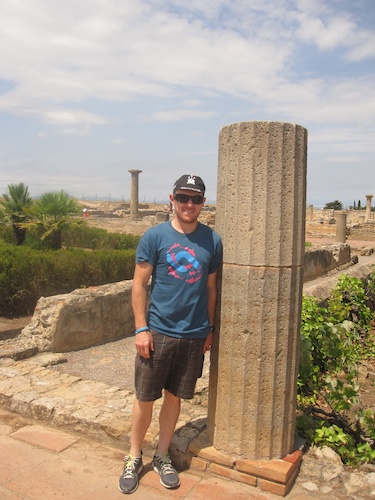 After a few days relaxing, sadly it was time to leave L'Escala behind.

We were blown away by L'Escala and would definitely come back. The food is awesome, the weather is awesome, and there is loads of cycling around.

No riding for me for a week, it was good to have a rest (it also explains the extra weight I am carrying around).

Next up, is Cadaques.