Read how to do Les Cingles in my special article.

Ever since my 2009 trip, I'd planned on doing Ventoux 3 times in one day. Ventoux is one of the toughest climbs I've done (but I love it) and the three peat is officially called Les Cingles. Only the toughest and maddest attempt it (apparently). I am neither tough nor mad, and it didn't seem too bad to me the first few times, so I thought why not.

The next day I took off, with Gerry – a Canuck living in delightful Languedoc – to meet me at the start of my last climb. Kate budgeted 6 hours for me and I thought it would take 5. In hindsight, if I had the right gearing (hill gearing instead of race gearing) I'd have been fine.

For those unfamiliar with Ventoux, it's my number 1 MUST DO ride in France (of the rides I've done). It's an unrelenting climb of mostly 10% all the way. There is no place to hide. There are a few very brief sections of higher cadence relief but they do not last long. You can take it easy on compacts and do it in comfort, or set your sights on other riders up the road and mow them down.

The climb rises up out of Bedoin into dry vineyards and through a little village then hairpins left into the climb proper. This is where the hell begins.

I lucked out with the weather on this day; 30 degrees, no wind, and hot early. My favourite conditions. 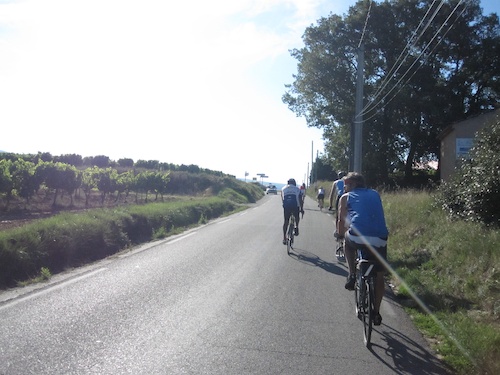 The road out of Bedoin at peak hour 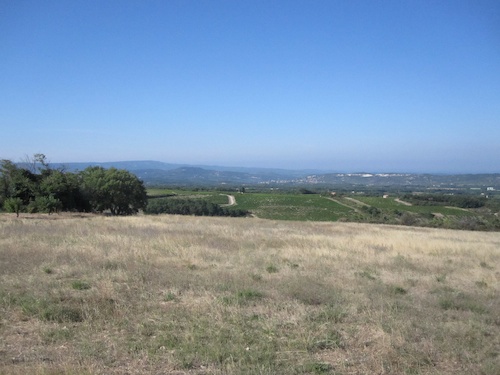 View over the valley toward Orange

Pine forests, no wind and a relentless sun conspire to bring your body temperature up quickly which results in an alarming loss of body fluid. I only had one water bottle as 2 bottles and a saddle bag are a bit naff (as in Not-Pro). 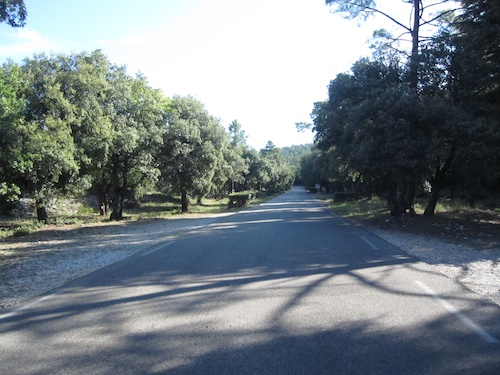 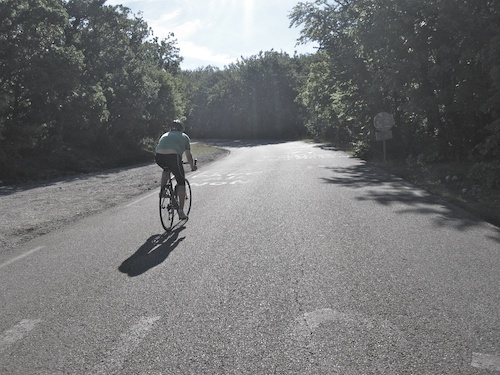 I shook off a few pesky Belgians, said hi to a Kiwi who didn't appreciate my friendliness as he was battling up, and got passed by 2 cocky Belgians with compacts who kept throwing looks over their shoulders after they passed. Jokers. 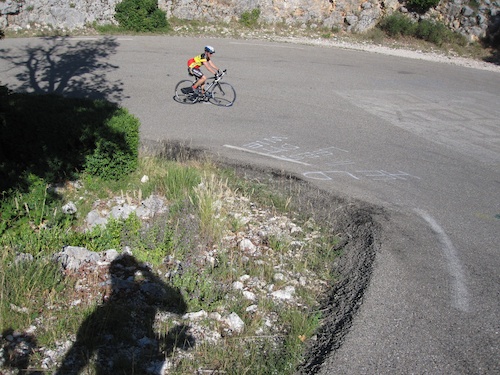 This is very steep - pesky Belgian hunting me down 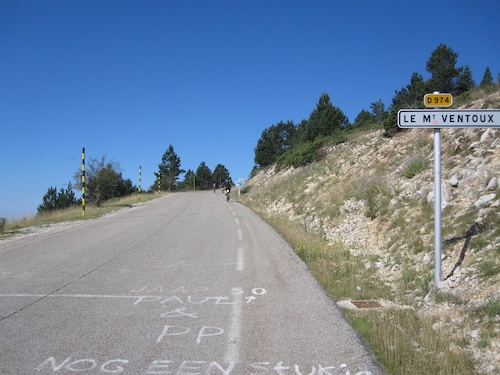 View up the road 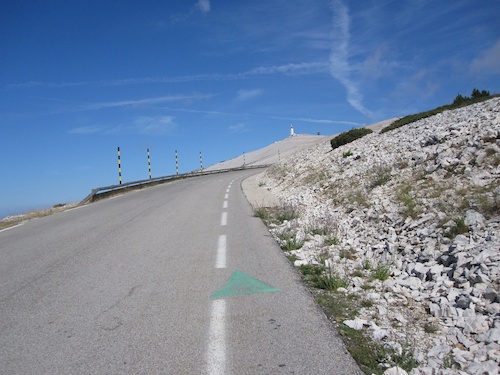 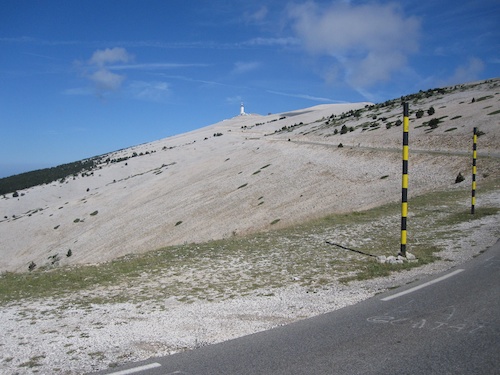 There were sheep being herded by a sheep-herder old-school-style (with a dog and sheep-prodding sticks). The sheep were kamikaze attacking down the scree slope onto the road. Caution was advised on the descent. 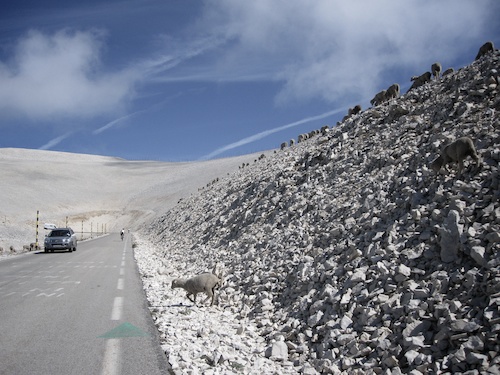 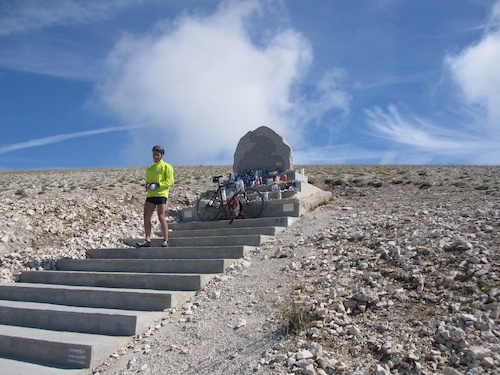 A rider pays his respects at the Tom Simpson memorial

I smashed up the first ascent (the hardest side, and the side the Tour de France takes) in about 85-90 mins with some stops for photos.

I pushed on up, got to the top then headed back the way I came to the turn-off to Sault at the Chalet Reynard.

The road down into Sault is as bad as the driving in France, care is advised if you do it. The ride drops down into beautiful lavender fields where the smell of lavender abounds. It's a remarkably cruisey ride. 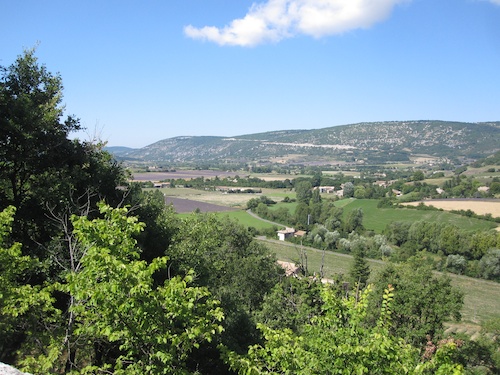 The valley toward Sault

I turned around in Sault and headed back up and knew I was in trouble. The lack of compacts was tickling the legs already. I soon realised my 6 hour budget was in trouble. I went as fast as I could but my race gearing was causing some serious issues. The road from Sault is also seriously bad. Almost as bad as French driving skills. Absolutely woeful. Not very conducive to fast spinny tempo climbing. 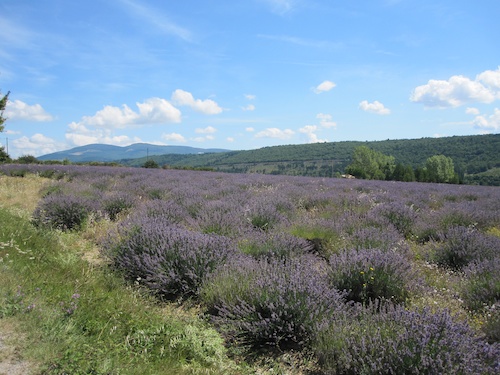 I pushed hard, appreciating the false flat into the Chalet Reynard then stopped for a Mars Bar, Orangina, Coke and Water. Scoffed Orange, Coke and Mars down, nearly up-chucked, and pushed on.

How's this guy! Some people don't even hide the fact they're on performance enhancers! He's even advertising for CERA! 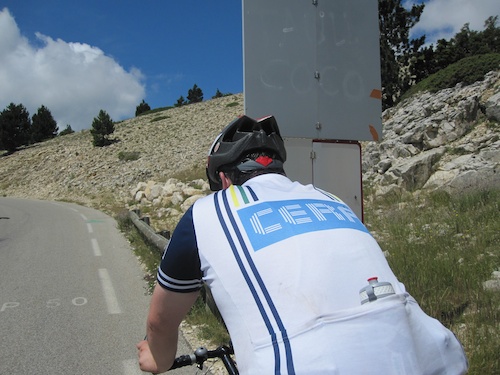 I got to the top about 30 mins behind schedule and bombed down the Maulacene side to meet Gerry. Hitting speeds of 85km/h I thought the ascent is going to be some sort of horror show.

I met Gerry at the base and despite his comment about me looking in fine fettle I felt anything but.

We headed up and his climbing gearing saw him spin up, up and away very quickly.

I WAS TOAST and in the hurt locker. 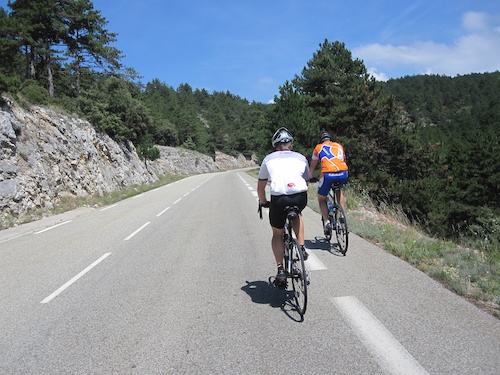 This is the last I saw of Gerry

What followed was an unreleting, painful 2 hour climb on inclines never dropping below 8%. Each roadside marker was a cheerful reminder of the next 1km of torture. They seemed to taunt me.

“SOMMET 18km! PENTE A 12%” (Allez, Allez you fat slow amateur!)
The stone markers seemed to exude glee at my pain.

“SOMMET 17km! PENTE A 11%” (What! Is ziss ze best you can do? Vhy are ve stones speaking in German instead of Fronch?) 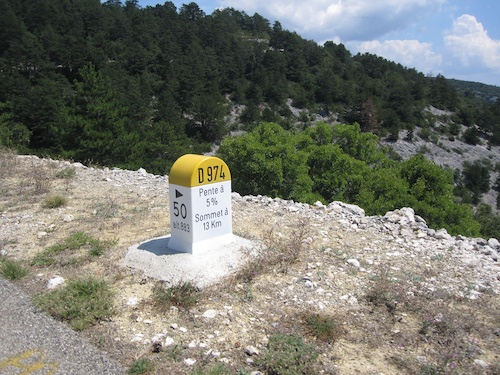 Even 8% seemed like sweet sweet relief. However the relief was short-lived as another km of 12% ascending faced me.

What seemed like a brazen attempt at heroism quickly descended into hellish farce.

I had people in boardshorts and ice cream bucket Stack Hat Helmets riding past me. I had an overweight guy in Rabo kit and HAIRY LEGS (the shock has still not worn off) on a mountain bike shadowing me. It was just some sort of Never Ending Story of endless taunting, but without the cool fluffy flying dog/dragon thing in the Neverending Story.

I was at 30rpm at some points.

I felt seriously sick and couldn't get air.

I counted the roadside markers – GRAVESTONES (marking the passing of other tortured souls?) – off as I approached Mont St Serein Ski station. This is where the road brings sweet sweet relief at 4-5%. 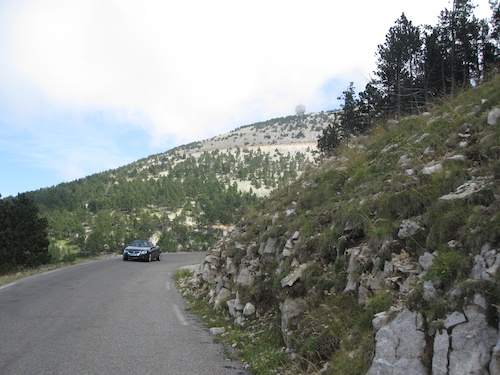 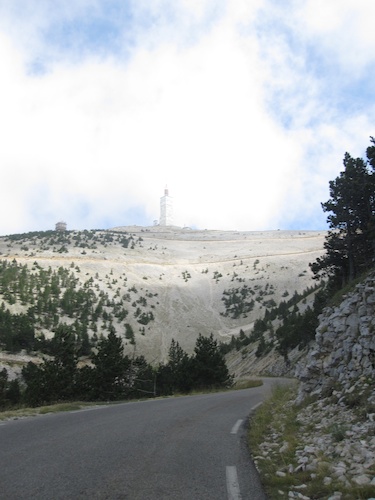 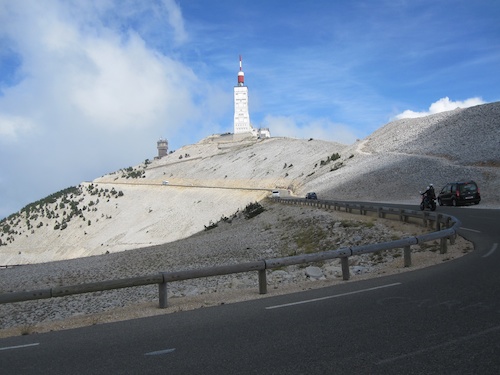 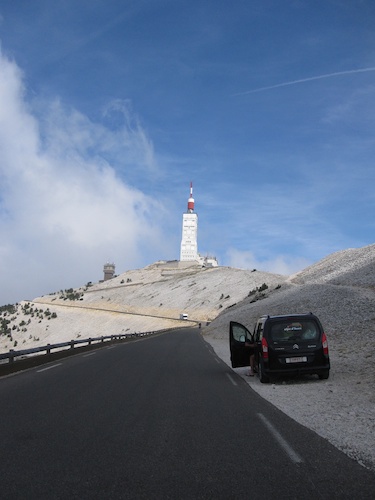 I chewed up 3 km and hit the final 2km. I mashed my legs until I rounded to the final corner, dropped 3 gears and macked it up. Gerry was waiting – with video – and kindly asked for a finishing line comment as I passed – BUGGERED was my answer.

Absolutely shattered, I scoffed a Coke and Orangina (thanks Gerry!), got Kate some lollies, got a couple of photos and bombed the descent. 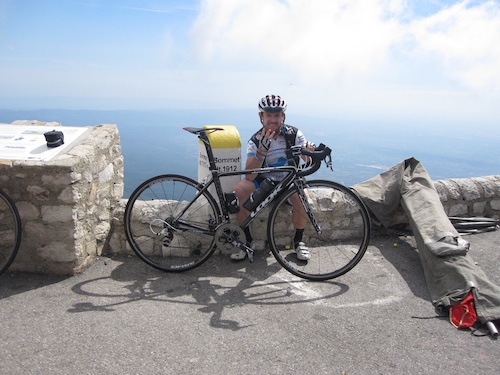 One happy result is I seem to have banished cramps. I am almost certain this is due to Hammer Nutrition's Enduralytes. 2 per hour of riding. Cramps gone. If you suffer from cramps, these are worth a look.

Now, the descent into Bedoin is technical in the sense there are some fun lines and it suits technical descenders. You can hit some very nice lines and hit the brakes very little.

Ordinarily I can descend and drop most people (that's not to sound arrogant) but Gerry stuck right with me and pushed me onto some very aggressive lines.

We hit some very good speeds to the point where I almost overshot a couple of corners.

At the base, it was the Gerry and Tim descending mutual admiration society as we chatted about descending and how we learnt to do it.

We ended up at the campsite for an hour or so over some Hoegaardens and Gerry then took off for a ride/train to his house.

Check out Gerry's sites out (personal site, Cycling Languedoc) for some very fun riding in Languedoc and good blogging.

Overall this was a great day.

If you're interested in giving the Ventoux a tickle, I reckon you should check out the VeloNomad “How to do Les Cingles” article.

My Strava data is below.

Check it out here if the below embed doesn't work.

Gerry kindly wrote a post about the 3-Peat, which you can check out here.

He also made a video of me finishing – HIGHlarious, I am sure you will agree.

Watch it here if the below embed doesn't work.

Read how to do Les Cingles in my special article.