After yesterday's epic Ventoux 3-peat, today was an absolutely nothing-day in Bedoin. Slept, recovered from the Ventoux 3-Peat, ate pizza and salad.

We unfortunately had to start heading north for home, and had been told by VeloNomad Steve to check out La Barroux which has an old chateau/castle.

Being Monday morning, of course there was a massive market.

Don't attempt to drive in/out of Bedoin on Market Monday until the evening. The markets there are very popular.

We had to drive the other way to Maulacene, but ended up in La Barroux a short time later. We had planned on staying in Petit Jardin, on reader Steve M's advice, but couldn't get out camper into the town!

We had a look at the chateau then left. It was a lovely old town but I am not sure where the shops were! Couldn't see a baker, butcher – nothing!

The chateau was super interesting. What amazes me are all the nooks and crannies (I found an old tunnel/passage) and how they even built it!

The battlements were pretty cool – you could see for miles and miles. 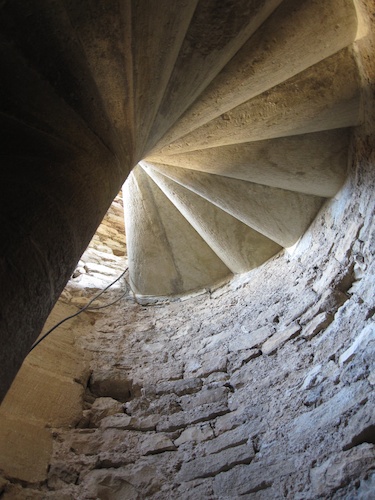 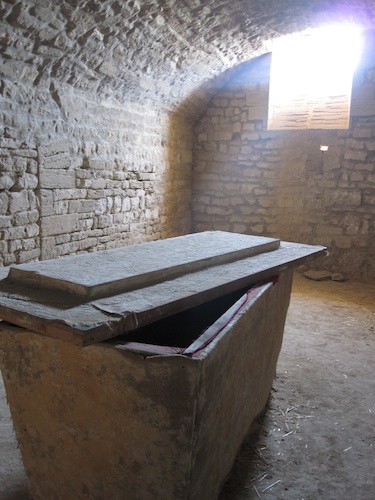 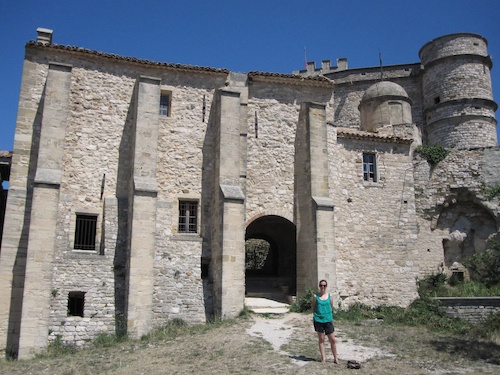 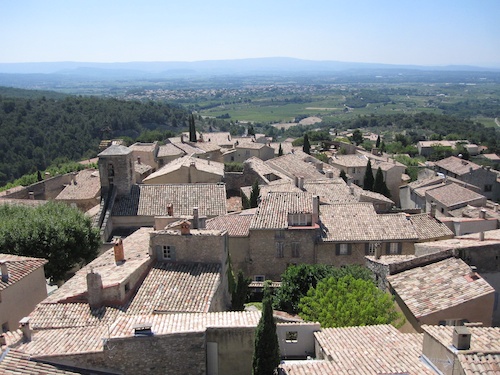 We passed through Vaison La Romaine which I definitely want to come back to; awesome riding, and Old Roman Stuff! Amphitheatre etc. We couldn't get camping so had to keep driving.

This is the worst part of having a camper and playing it by ear; you might not get camping where you want it.

We ended up in municipal camping in Tulette which was actually really awesome. We propped up and took it easy.

This is the worst part of the holidays; the last few days where it's hard to get motivated to do stuff.

We headed north through the Beaujolais region (famous for its wine) and decided it is a pretty awesome place; small rolling hills, very picturesque.

We ended up off the road around Beaune, after getting lost in Chalon-sur-Saone. Beaune is the capital of the famous Burgundy wine region. There are a lot of vineyards around and it is quintessential French countryside – perfect for cycling (and wine tasting!).

After getting off the Autoroute, we followed camping signs to Savigny-les-Beaune, a DELIGHTFUL little town in the famous and beautiful Burgundy region.

We scored camping – one of the last spots – in a lovely camping ground and I went for a spin. I had a delightful ride through some gentle hills in the sun. Goodness I love rural France, it is such a peaceful and life affirming place to ride. I could barely contain my excitement as I rode along. 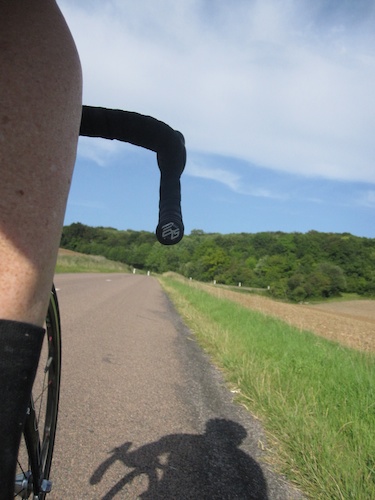 Arriving back, I was delighted to find the campground had a little kitchen so we had a couple of hamburgers (well cooked) and chips and some Heinekens in a peaceful campground in the afternoon sun, bliss!

We had a stroll into town and were amazed at the veggie gardens, it was crazy. ENORMOUS pumpkins, tomatoes, and so on. They sure know how to grow veggies in France. I took some photos of some of the veggies. How's the parseley! Taller than me! 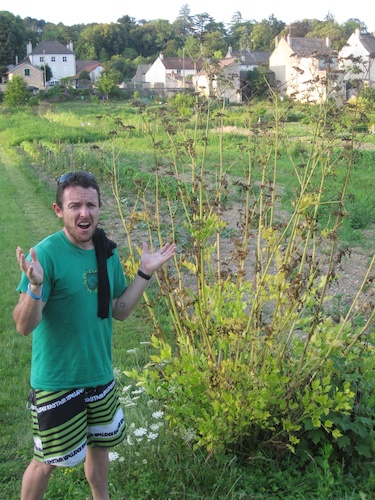 This is the first time a zucchini has shocked me! Vegies on steroids! 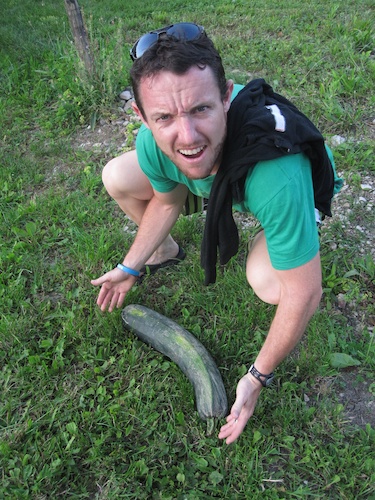 Awaking the next day I had an intuition I should have a ride. The weather looked threatening but it was still warm and sunny.

We headed off and got off the Autoroute again and lucked out with camping. We were getting close to Paris and there was not much around.

We passed through Moret-sur-Loing which is an AWESOME medieval walled city on a river. Absolutely amazing. Renoir apparently painted here (my mum will love that factoid!).

We ended up in Camping Lido which was pretty nice but very busy with many others propping up here for the night before heading to Paris. We packed up most of our stuff as we had to leave the next day.

I had a spin early out toward Fontainebleau, where one of the famous royal chateaus of yesteryear France sits. Check it out, it's pretty impressive; we'll be back here for sure.

We headed off around 11AM, and followed the Garmin Nuvi into Paris. Now, when we landed, I made sure I bookmarked the GPS co-ordinates of the camping car depot. This I learnt from my 2009 trip when my friend and I got lost trying to get back to the camper depot in Frankfurt.

As we got to a certain point, Kate told me she thought we were going the wrong way, according to Google Maps which she was watching on my iPhone. Note to Google – hurry up and start making GPS units!

Kate was right, I was wrong. We ended up in Central Paris (oops) and had to spin around. I have never been to Paris and only got a glimpse but it looked awesome.

Dropping the campervan off

We headed back out of Paris and arrived at the depot at 1PM. The depot was closed from 12.30-2 for lunch. We parked out the front and cleaned the place out and packed the bike.

By the time they opened we were ready to roll.

An Italian family had been locked inside the depot through lunch and was ahead of us getting their van checked out. The poor guy had a big argument with the depot about some scratches on the roof – he swore he told them about it when he took it and claimed they said they'd add it to the sheet, which they hadn't. They said no no no, and that he owed them 1000 Euros!

That's a huge VN tip for campervanning and is covered (along with loads more handy tips) in the Campervanning France Guide ebook.

We had our van checked out, shook our heads solemnly at the wrecked quarter panels (from the L'Escala Incident) and paid 400 Euros.

We had a taxi called, which turned out to be a sleek BMW M3 jet fighter. The driver gave a big oh-la-la at all our luggage (I did tell the depot to call a mini van as we had a bike) but we got it in.

At the Airport – British Airways shambles

We got to the airport and then the fun began!

We had a British Airways connection from Paris to Heathrow where we were connecting to Qantas.

Arriving at the BA check-in, there were barely any staff checking people in. There seemed to be a rule whereby you had to pre-checkin at computer kiosks, then proceed to the baggage drop. We wanted to check our bags through to Melbourne so we were told not to worry about it using the kiosks.

Hmmm, not very good capacity planning, that. No call, no warning, nothing.

I fixed that up by having us flying out of De Gaulle.

I went back to the desk and was told BA would not honour our Qantas baggage allowance (note to Qantas: don't worry about your BA alliance – they absolutely SUCK as partners). I tried explaining we always have our Qantas Club allowances honoured but in a stunning display of arrogance I was told “we aren't Qantas.” Hmm, that was a shocking revelation for me, I can tell you.

So here we are stuck up the famous creek without a paddle. I sure wanted to whack BA over the head with a paddle though.

We eventually cobbled together a solution whereby our extra bag was sent to Heathrow for 40Euro, where we would have to get it, clear customs, change terminals then check back in with Qantas – all of which would eat into our valuable Qantas Lounge time. A travesty! We had the other two bags (including the bike) checked through to MEL.

The next outrage was American Airlines (who service the BA lounge at De Gaulle), not honouring our Qantas Lounge access. Another shocking travesty.

We waited at a bar near our gate and heard the announcement the gate had moved 2 spots. We headed to the gate 35 mins before the flight time and as we headed down the stairs, a counter staff member looked up and yelled “Mr Marsh?” to which I nodded. He started gesticulating wildly indicating we should hurry.

We JUST made the flight in time – the sky bridge was about to be closed. PHEW!

Heathrow Clockwork, the Qantas Lounge and onto Singapore

Arriving in LHR, I was AMAZED at the excellent transportation. We cleared customs very quickly (Melbourne airport lift your game), got the bag, got in the Heathrow Express, and was in the other terminal in about 10 minutes. Melbourne Airport and the Victorian State Government could learn a thing or two about this – a train from the airport to the city – shocking!*

We checked in quickly and were holed up very quickly in the Qantas Lounge which had an EXCELLENT bar selection. I partook of some port, Chivas, Argentinian merlot (good), Barcardi 151, Tanqueray and Baileys. Awesome.

Boarding the plane, the next shocker revealed itself; our A380 (which Qantas has fitted out very well) had been swapped for a 747. Oh, the outrage.

I felt like I'd been transported back to the 1920s. I half expected chickens to start flying around in an Indiana Jones-esque Temple-of-Doom-pilot-parachutes-from-plane “Goodbye, Dr Jones” episode (yes I have used that joke before).

We settled in and the flight was like many long haul flights. Boring. I slept very little as we were arriving at 6AM in Melbourne and the Singa-Mel leg was 8 hrs so I planned on sleeping on that leg instead.

That's a good way to manage jetlag. Get your body into the destination time whilst in transit.

Arriving in Singapore we headed to the Qantas Lounge for 2 hours. Upon entering I was happy to see the footy on TV. Whilst that was pretty cool, it wasn't cool to be sledged by Collingwood supporters though (because I barrack for Melbourne – non Australian readers, do some Wiki/Googling).

Again having some delightful supplies from the bar, we chilled out – all very relaxing. The Qantas Club is totally worth it, if you don't mind flying Qantas into horrible LHR. It's a real pity they don't fly into Nice or Geneva or Milan.

Some of the passengers who joined us at Singapore were similarly disgusted to have been shunted onto a 747 from an A380. Very uncivilised!

After another long flight, and some sleep, and we arrived home.

Despite me declaring nuts, chocolate and French cheese at customs, we were waved through, which was just as well given all the rum I forgot about in my baggage, oops.

Kate's parents picked us up, and boy was the 14 degree rainy Melbourne weather a delight!

I didn't get debilitating jetlag, it's been a bit more insidious; waking at 4AM, tired at 8PM. This post was written a week and a half after we got back and I am still jet lagged.

So, the trip. We drove too much, ate too much, but it was awesome fun, and we can't wait to be back.

I'll have a trip wrap up including my top insights, tips and pitfalls coming up in the next post. You can check out 2010 VeloNomad trip wrap up here.

Next Post: How to do Les Cingles de Mont Ventoux – the Ventoux 3-peat