Watch my review of the 2015 Peaks Challenge Gold Coast.

If you're wondering when Peaks Challenge Gold Coast 2017 dates are, you'll be disappointed by news the event is cancelled.

Next up for Peaks Challenge will be Cradle Mountain on November 5 (Sales open next Monday to the general public).” Bicycle Network Representative

I guess this means that Peaks Challenge Gold Coast in 2015 and 2016 cost Bicycle Network money. Or, there is some other reason not to run it.

There were around 1500 riders in 2015, which probably means the event isn't financially viable.

If Bicycle Network reconsiders Peaks Gold Coast, they might look at the price: $300 for a one-day sportive is much too expensive. 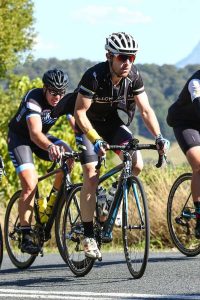 It sounds like Peaks Gold Coast won't return, which is a real shame. This comes on the heels of Wiggle's Speed in the Tweed which was held once 2013 and then disappeared from the calendar, along with Wiggle's other Cycling Series events.

Where to from here?

It's a strange decision because the logistics of Peaks Cradle Mountain (Tasmania) and Peaks Falls Creek aren't as favourable as the Gold Coast. There were a lot of really great reasons to do Peaks Gold Coast, as I mention in my video review.

For those living on the Far North Coast of NSW, it was great to have a high-quality Gran Fondo on the Gold Coast.

It was a fantastic event: really well-organised and best of all it started and finished on the Gold Coast, where there's loads of accommodation and an international airport.

For the many cyclists on the Mid North Coast, Far North Coast and southern Queensland, there are not a lot of quality Sportives/Gran Fondos on the calendar.

For the NSW folks, there's the Grafton Inverell epic but that has a lot of logistical challenges.

There's a couple of sportives around Brisbane of course. And I was delighted to find (thanks reader Nick) the Velothon series pops up via Velothon Sunshine Coast. (It looks like a really great few days away, if you're looking for a mid winter escape. Although I'll have to ask them to move it so it doesn't clash with Mrs VeloNomad's birthday.)

It's a real loss because Peaks Challenge Gold Coast had serious credibility and was really well organised.

Moreover, it means that the Gold Coast misses out on valuable tourism from Sydney, Melbourne and Adelaide (and potentially NZ?) cyclists seeking to escape the frigid winter.

Let's hope that the cancellation of Peaks Challenge Gold Coast 2017 doesn't mean the end of the event.